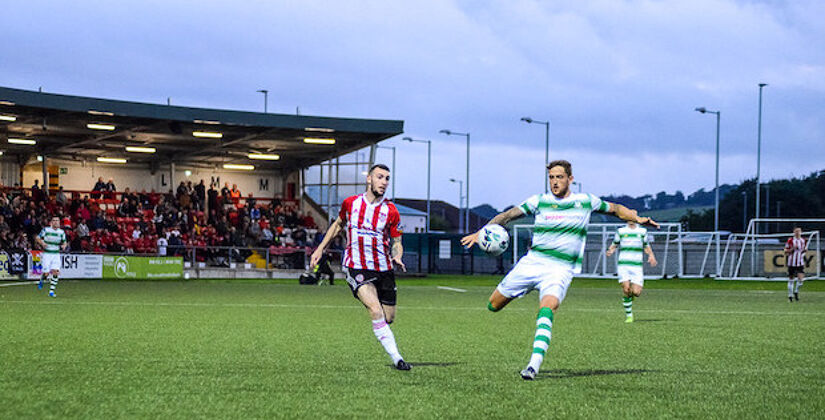 The Candystripes are still seeking their first win of the season having lost all three of their fixtures so far this year.

They welcome last season’s champions Shamrock Rovers to the Ryan McBride Brandywell Stadium (kick off 7.45pm) for what is, for both teams, the start of a run of four games in 11 days.

"It hasn't been good enough from us and we have to get better,” said Declan Devine speaking about the start to the season with his club’s media team ahead of the game.

“We know how good a side Rovers are but at the minute we just need to focus on what we can change.

"You can already see how tight this league is going to be this season. The players are determined to get back on track and although games don't come much tougher than this, we're honestly looking forward to it."

City come into the game following a 2-0 defeat to St. Patrick’s Athletic in Inchicore where they played over an hour of that match with ten men following Danny Lupano’s sending off for two yellow card.

He is suspended for this evenig’s re-arranged game following its postponement last month due to Nathan Gartside’s initial inclusion in the Northern Ireland World Cup qualifier squad.

Prior to the defeat to Pat’s, Declan Devine’s men lost 2-1 at home to Waterford and 2-0 away to Longford Town in their opening fixture of the 2021 season.

Victory for Derry would move them off the bottom of the table and would see them jump above Dundalk to go level with Waterford in eighth place.

The Hoops looking their second win of the season when they travel to the Brandywell on Tuesday evening.

Besides from the 2-1 win over Dundalk, twice Rovers have trailed late in games only to equalise to earn a point – against St. Patrick’s Athletic in their first game of 2021 in Tallaght Stadium and away to Sligo Rovers last Saturday.

Should the Hoops pick up all three points they would move level with third placed Sligo.

Sligo Rovers’ goal came from an uncharacteristic error by Alan Mannus who allowed Walter Figueira’s low shot slip through his hands and under his body.

"It was a very, very rare mistake from Alan. He was obviously disappointed after the game but very quickly you put it to bed. You move on and get ready for the next game which I've no doubt Alan will do.”

Rory Gaffney came off the bench to score his first of the season two minutes from time to salvage a point for the Hoops.

"I think this team has shown quite a number of times that it has tremendous character and belief and they showed it again the other night. We never give up and I think that's a really important quality to have."

Last season the Hoops trailed in just two of their league games in the shortened 18 game season and both times they emerged victorious – in the 3-2 win over Dundalk and in the Brandywell to Derry City where they won 2-1.

Bradley feels that the Candystripes’ results so far this season haven’t reflected the team’s performances.

"It's going to be a tough game. I think the results don't tell the full story. I watched their game against Waterford and in my opinion they were the better team. They created a lot of good chances.

"I've no doubt that they'll be ready to go and try and win the game against us so we've got to be ready for that."

It is four years since Derry City last beat Shamrock Rovers – that was a 2-0 win in the Bogside in August 2017.