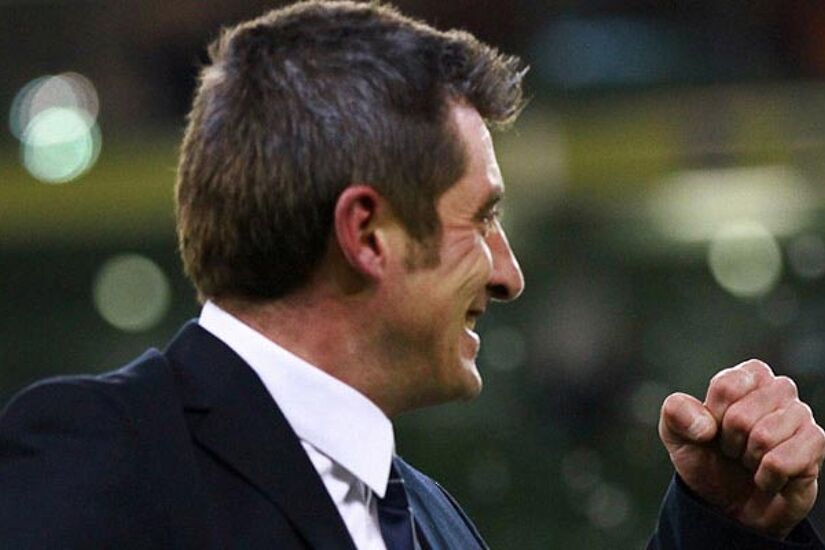 Without a win in the league so far, Finn Harps manager Ollie Horgan was surprisingly in buoyant form when he mentioned that his players are looking forward to the challenge of playing Derry City in the North-West derby in Ballybofey.

Last week, Harps lost 4-0 away to Waterford in the league. Mark Coyle was dismissed after a half an hour, to which Aaron Drinan (two), Shane Duggan and Dean Walsh all netted for the hosts. The Donegal club have now conceded 17 goals in their last six fixtures.

However, Harps had their own confidence boosted by securing an EA Sports League Cup win over Sligo Rovers on Monday night at Finn Park. Debutant Stephen Doherty and Mark Coyle got the goals in a 2-1 extra-time win, which was actually their first win of the season in all competitions.

Harps are coming up against a Candystripes outfit that are fourth in the table and seven points ahead of the hosts.

“Derry are going well and have a fine squad of players. I watched them on Tuesday night in the Brandywell and while that won’t be anywhere near the side that we will be playing us on Friday night, there was a very good atmosphere and lots of positivity from the supporters for the team.

“So you can take it they will come to Ballybofey full of confidence and will be really pushing to take the three points.”

In true Ollie Horgan form, the Galwegian is playing down his side’s chances in the derby. He was full of praise for Derry when speaking to his club’s website after Monday’s game.

“Derry are fourth in the Premier Division. You only have Shamrock Rovers, Dundalk and Bohemians above them so we’re going to have to lift our game big time to have a chance of getting even a point from the game.

“They are nine points above us in the table so our lads know what they are facing into and it’s going to be a savage battle to be up to speed with the way Derry play going forward.

“Listen we have to hope that the win on Monday night, even though it was the League Cup, gives us that bit of confidence but we just cannot get carried away with one positive result otherwise Derry will win at a canter.”

In team news, Raffaele Cretaro and Niall McGinley have joined Harry Ascroft, Mark Timlin and Gareth Harkin on the injury list while John Kavanagh, who missed the Sligo cup game due to a hamstring problem, is doubtful. Mark Coyle is suspended.

Derry City have had a perfect week, winning their two games without conceding.

Last Friday night, Declan Devine’s side beat Sligo Rovers 2-0 at the Ryan McBride Brandywell stadium. David Parkhouse netted on the hour mark, while Ciaron Harkin finished the game off in injury time. The win was their first in the league in over a month.

Junior Ogedi-Uzokwe, Eoghan Stokes and Gerardo Bruna all netted on Tuesday night, as Derry comfortably dispatched first division Longford Town 3-0 at the Brandywell to kick-start their defence of the EA Sports cup.

No doubt delighted with his side’s application in those two wins, boss Devine, when speaking to the Derry Journal, is aware that his charges’ need to be at the top of their game to achieve a positive result in Finn Park.

“There’s going to be a big crowd at a difficult venue and we’re going to have to make sure we’re on top of our game if we’re to get anything from it. League form goes out the window when a North-West derby happens.

“They will be looking at this game as having the potential to get their season up and running. They’ve drawn with Dundalk down there and took Shamrock Rovers to the last two or three minutes. They were very unfortunate to lose to Cork having scored three against them at home.

“It’s a very difficult game; it’s a game we have to take on its merits. But we’ll have to be on top of our game if we want to take something from it.”

Derry have no injury concerns or suspensions for the game, while the manager confirmed to his club’s website that Patrick McClean had trained all week and Peter Cherrie was also ready to return after missing a couple of games through injury.

“Both of them will be added to the squad but we’ll make a call before kick-off if one or both will start. If we decide that Peter needs more time, I have total faith in Nathan Gartside. He has been excellent for us this past couple of weeks.”

Both sides have met each other 20 times in competitive fashion. The Candystripes have won 15 of those, while Harps managed to win just two. There has been three stalemates.

There has been an average of 3.3 goals per game from those 20 fixtures.

Ciaran Coll, now with Derry, returns to his old stomping ground. He spent the last ten years at Ballybofey, and had a testimonial with the club.

Graham Russell has yet to write anything about themselves but click on the bio link to view all past work.