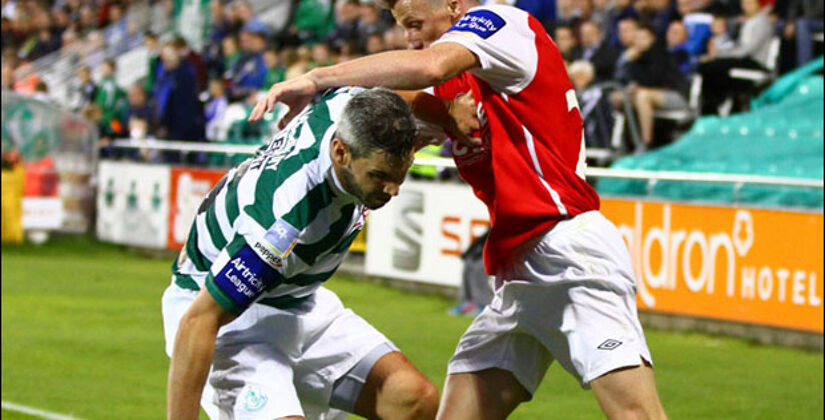 With the two club’s home grounds less than 10 red LUAS stops from one another, this Dublin decider between the Hoops and the Saints in Tallaght will give derby bragging rights to the winners in the country’s capital this weekend. After last week’s defeat to Dundalk, Rovers sit in fifth place in the league 11 points behind table toppers St. Patrick’s Athletic going into the game which has an 8pm kick off in Tallaght Stadium on Friday night.

When the sides met at the start of the season, Rovers claimed an impressive 3-0 victory but the Hoops have struggled to match the heights of that performance in the league since then. The highlight of their season so far has been claiming a second Setanta Sports Cup and, while the league title may be beyond their grasp with that gap to the leaders, the Hoops have European qualification in mind, in addition to the three cup competitions that they are still in.

Rovers strengthened their squad during the week with the signing of midfielder Richie Ryan. The 28 year old was a free agent after leaving Dundee United at the end of the SPL season. The Hoops are confident that the former Sligo Rovers player’s international clearance will arrive so that he will be available for selection against Pat’s. That will be important for the outcome of the game as Rovers are missing central midfielders Stephen Rice and James Chambers, both due to suspension.

“It has been a good week for us so far with the signing of a quality player in Richie Ryan,” said Rovers manager Trevor Croly about the arrival of the 2010 PFAI Players’ Player of the Year in Tallaght.  “He will be a significant addition to the squad. We are looking forward to what should be a great week ahead, as we have three big, exciting games coming up. Friday night will give us a good chance to reduce the gap on the teams ahead of us. After that we have a cup semi-final to look forward to [against Sligo Rovers on Tuesday in Tallaght] and then another derby game again next weekend [against Bohemians]. So it is a big week, and one that gives us plenty of opportunity to make gains.”

Jason McGuinness, who along with Stephen Rice was sent off last week in Dundalk, will miss the game but the Hoops are hopeful that both defenders Ken Oman (substituted in the friendly game with Aston Villa last Sunday) and David Elebert (returning from long term injury) will be available for selection.

St. Pat’s travel to Tallaght on Friday to face familiar rivals Shamrock Rovers with the Saints looking to maintain their lead at the top of the Airtricity League table. The teams have played three times this season but Pat’s have yet to gain a victory. In their first away game of the league campaign back in March, the Saints went down 3-0 in Tallaght. Last month there was a 2-1 extra-time loss in the EA Sports Cup quarter-final, also played at Tallaght Stadium. The other game between the sides was a 0-0 draw in Richmond Park in a match that Liam Buckley’s men dominated but couldn’t find a winner.

“Tallaght is always a nice place to play and the pitch is always good up there,” said Saints boss Buckley speaking to stpatsfc.com. “It should make for a good game of football. It’s a game we’re all really looking forward as clashes between the sides are always big occasions. It’s an important three points and things are really tight at the top so we’ll be going there looking to get the result.”

Tallaght native and former Rovers captain Aidan Price knows all about the rivalry between the two clubs but he is just focussing on getting back to winning after their disappointing 0-0 draw in Inchicore against Drogheda United in their last league outing as he explained to stpatsfc.com.  “I had a few great years at Rovers when I was there,” said Price who captained the Hoops in their only season in the First Division and who won a league title with the Hoops in 2010. “But I’ve played them a good few times since I left and to be honest all the focus will be on getting the points. As a group we’re all really looking forward to the game.”

“We were a bit disappointed with the result against Drogheda last week so we’re keen to get back to winning ways. The last time we played in Tallaght in the league, we just weren’t good enough. But to be honest it ended up being a real turning point for us. We were really honest with ourselves in knowing what we needed to do and we went on a great run from that moment. Therefore all the lads are really keen to get the three points on Friday.”

A large crowd is expected on Friday with tickets for Pat’s fans on sale in Richmond Park ahead of the game in Tallaght.

Pat’s come into the game with just one defeat in their last 16 games with their recent record reading three wins, two draws and one defeat.

Rovers conceded three league goals in a game for the first time this season as they lost their 16 game unbeaten record last week against Dundalk. They are undefeated in the league in Tallaght Stadium this season with six wins and five draws. Their only competitive defeat at home in 2013 was in their very first game of the season back in early February when they lost 1-0 to Coleraine in the first leg of their first round Setanta Sports Cup tie.

St. Pat’s have only won one league game in Tallaght since the venue opened back in 2009. That solitary win game in the Dublin 24 venue came back in March 2010 when they won 2-0. Ian Bermingham and Vinny Faherty were on the scoresheet that evening.