Two goals from Thomas Stewart and a 90th minute penalty miss from Ryan Guy sent Shamrock Rovers to the top of the Airtricity Premier Division table at Tallaght on Monday night in a game that may have started slowly but provided high drama in a second half that just kept on giving.

There was a lot of noise in the build up to this game, as you might expect from a Dublin derby clash of first versus second in the league. Both sets of fans were aware of what was at stake and both led with a raucous brand of optimism. 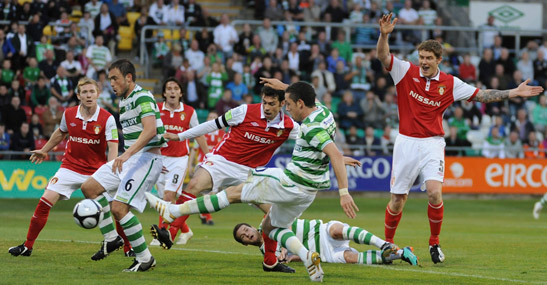 The early part of the game was played in the visitors half with Stewart and Gary Twigg both putting the Pat’s defence under some pressure with hanging balls played across the box. But despite a nice turn from Paddy Kavanagh that earned warm applause from the home crowd Rovers didn’t press with the urgency that one might expect from a team chasing top spot.

Indeed, despite Stewart poking a shot onto the post in the 11th minute, there was a general lack of urgency about the opening half and the next genuine threat did not arrive until the 25th minute when Shane Guthrie blew his shot high over the Rovers crossbar following a corner that the home side failed to clear.

Rovers rallied somewhat at the close, Dennehy showing what he is capable of by skinning Damien Lynch on the left flank and sliding a low cross towards Stewart. Crucially a flailing Pats leg blocked his effort and Twigg’s follow up shot was also deflected away. Finally James Chambers, introduced on 41 minutes for central defender Aidan Price, drilled a shot towards the Pat’s goal that Gary Rogers did well to parry to safety.

The second half would prove to be an entirely different beast and began with a noticeably more vigorous approach, particularly from the home side. A Dennehy cross found Twigg on the edge of the six yard box and only a spectacular diving save from Rogers kept the visitors level.

But it was Pats who broke the deadlock. In the 50th minute a Ryan Guy free kick from the left was punched into the path of Stuart Byrne and his deflected shot fell to Derek Doyle who calmly pushed the ball around Alan Manus and inside the far post.

Rovers responded well with Kavanagh and Turner turning up the heat in the middle of the park. Kavanagh suddenly started to create space and Turner put in some tackles that signified the start of a greater intent.

In the 64th minute Rovers got their due reward. Kavanagh and Chambers exchanged a neat combination of passes and Chambers swept a low cross behind the defensive line for Stewart to pound the ball into the roof of the St Pats net.

Seconds later Dennehy thought he had put Rovers ahead when he met a Kavanagh cross at the back post and powered the ball past Rogers. But referee, Alan Kelly, blew for handball and the blast of sound from the home support withered away in disappointment.

With the game level Rovers took charge. James Chambers pushing forward from right back was causing havoc and it was his cross, perfectly curled to the back post, that produced Rovers second goal. Twigg met the ball in the air and Rogers flung himself to the left, producing yet another top class save, but Stewart met the rebound and put Shamrock Rovers on top of the league with just nine minutes left on the clock.

The home side showed flair and invention as the game wound down, but it was Pats who provided the final act. In the 90th minute they laid siege to Rovers goal line. A volley of shots pinged about between the red and green shirts before Kelly blew the whistle for a hand ball. It was Dennehy who was picked out from the mob, receiving a straight red card.

Ryan Guy stepped up and shot to his left. Manus went the right way, pushing the ball out to safety and Tallaght exploded. The final moments passed in agony for both sets of fans but the whistle finally came and. for the time being at least, the baton has changed hands.