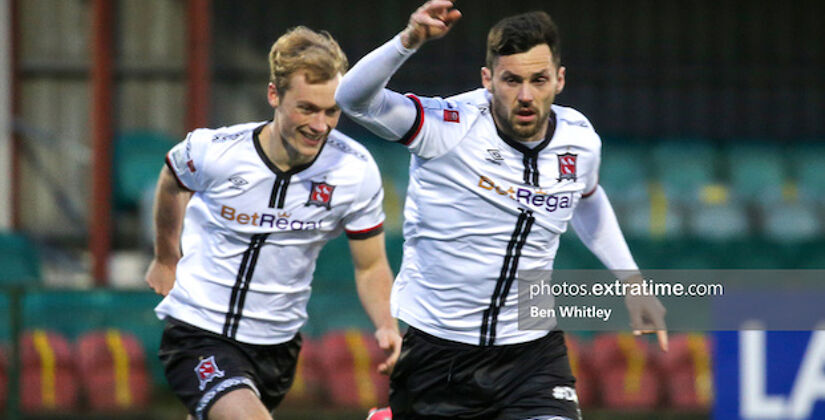 Dundalk started the game with a real positivity and zip to their play across the pitch from the off. The visitors looked really comfortable on the ball and dictated the game on their own terms, the time they were being allowed on the ball was almost to their detriment as they probed for an opener but created little.

Shelbourne could have taken the lead against the run of play on ten minutes. Brian McManus’ in swinging corner bypassed everyone on its way to goal causing panic stations for Nathan Sheppard as he scrambled to save.

As the half progressed Shelbourne slowly but surely grew more and more into the game.

Andy Boyle and Mark Connolly had their hands full with the directness of Shelbourne in attack. This directness was causing the away side major problems resulting in a string of fouls which angered the home crowd.

The best chance of the half fell to JR Wilson on thirty-four minutes and he really should have put his side ahead with a glorious chance at the back post.

Aodh Dervin started the move off in midfield doing well to find his captain Luke Byrne free on the left. Byrne raced past Sam Bone before swinging a low ball right across the face of the box to the unmarked JR Wilson at the back post.

Wilson’s eyes lit up as the ball came his way, but he got it all wrong blazing his effort well clear of the bar.

Dundalk head coach Stephen O’Donnell attempted to change things up a bit and inject a bit of life into his side by bringing the tricky Dan Kelly on for the second half. Kelly’s night was disappointingly brought to a premature end after just fifteen minutes leaving the field with an injury with Joe Adams being introduced.

As the second half wore on Dundalk began to up the intensity in attack and pushed hard to find an opener. That elusive goal did come on seventy minutes with an unstoppable header into the bottom corner from close range by Patrick Hoban. Keith Ward excellent in the build-up.

To the delight of the home crowd Shelbourne were level with just five minutes remaining in the game. The lively Sean Boyd was pulled down in the box and after a lengthy consultation Tomney awarded the spot kick. Boyd made no mistake slotting his effort past Sheppard to bring the sides level.

The points shared in a scrappy game and the fairest result on the night.

Brendan Graham has had a few stints with Extratime.ie and is back writing with them since November 2017.Brendan is a fan of Bohemian F.C and has been to most of the League of Ireland grounds …