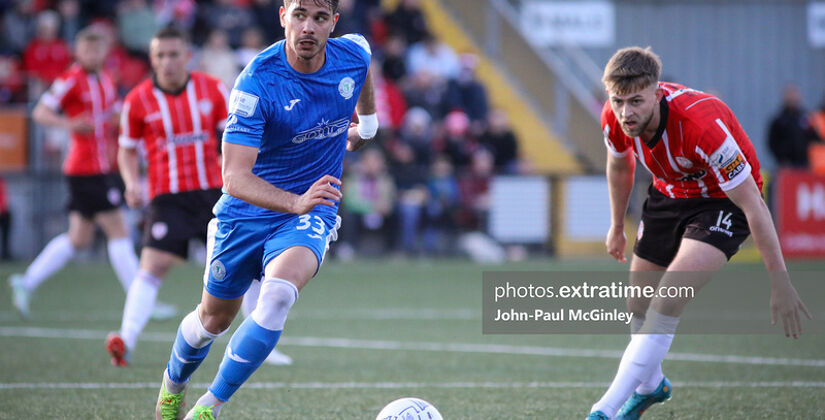 Finn Harps ended their horror run of games without a win, securing their first victory since the end of April as they decisively beat Drogheda United at Finn Park.

Filip Mihaljevic opened the scoring from the spot as Eric McWoods doubled the lead on the cusp of half time. McWoods made it a brace for himself on the hour as Harps moved off the bottom of the table and two points above UCD. Drogheda United remain in eighth place.

Ollie Horgan made two changes to the side that lost out in the cup -  Elie N'Zeyi and Regan Donelon in for Ryan Rainey and Rob Jones. Kevin Doherty also made two changes from their last outing with Evan Weir and Chris Lyons in from the start.

Finn Harps fashioned the first opportunity of the encounter as Rob Slevin headed over from an early corner. Adam Foley was the first to test the home netminder after he was involved in a three man counter attack with Ryan Connolly caught out on the halfway line.Eric McWoods also saw an effort thwarted at the near post after a precise through ball from Elie N'Zeyi.

Darragh Nugent went mightily close to breaking the deadlock with just under 15 minutes gone, his low strike, however, pinged off the base of the post.Filip Mihaljevic and Darragh Markey both had attempts saved in the minutes that followed but with 20 minutes on the clock, Harps were awarded a penalty.

Eric McWoods was brought down by the duo of Andrew Quinn and Dane Massey and Filip Mihaljevic stepped up and slotted the spot kick into the bottom right corner.

McWoods and Mihaljevic both had headers glance wide in the moments that followed as Harps went in search of a second. Drogheda had a number of opportunities from set-pieces but James McKeown was first to every delivery sent his way.

With the half time interval moments away, Finn Harps doubled their lead. Conor Tourish won the ball on the halfway line, it was in turn picked up by Gary Boylan who found Filip Mihaljevic, he then played through Eric McWoods just inside the area with the American finishing over the onrushing Colin McCabe.

Ryan Connolly went close with an effort from range while at the other end Gary Deegan stung the palms of McKeown with a free kick as the second half started in a similar fashion to the first.

Just shy of the hour, things got better for the hosts as they added to their advantage. Regan Donelon whipped in a ball from the left and Eric McWoods rose high in the area to nod the ball into the back of the net.

The action in this game kind of fizzled out as it neared its conclusion. Academy Graduate Victor Arong stepped off the bench for Drogheda as Finn Park was set to taste its first win since the 29th of April.

Chances went by the wayside in the dying embers of the game as Finn Harps ended their terrible run of games without a win.