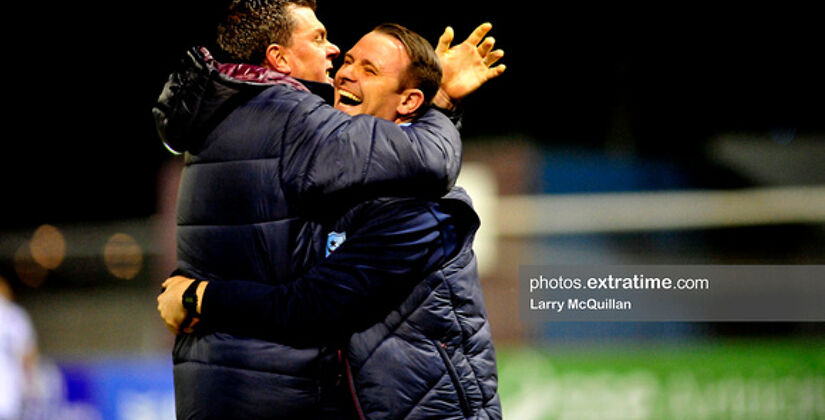 Tom O’Connor reports from Head in the Game Park

Kevin Doherty’s Drogheda United took all three points courtesy of a second half Dean Williams penalty in a tense derby encounter against rivals Dundalk at Head in the Game Park on Friday night.

Dundalk arrived at the Boyneside venue with an unchanged lineup following Monday’s goalless draw with Shamrock Rovers with Darragh Leahy and  Steven Bradley returning to the squad as they took their place among the substitutes.

For their part, Drogheda United had to contend with the injury blow of Darragh Markey and he was replaced in the starting lineup by James Clarke.

A capacity crowd awaited both teams in a hotly anticipated derby encounter which was broadcast live on national television. As with a game of such intensity, it took a while for both teams to settle into their rhythm and each side had a number of opportunities in the opening twenty minutes- Pat Hoban shooting wide after John Martin was found in space in the Drogheda box while Andy Boyle had to be smart to clear a Dean Williams effort off the line after the striker had rounded Nathan Shepperd.

The Welsh netminder denied Adam Foley at his near post just past the half hour mark while shortly before half time, John Martin had to be alert to head Dane Massey’s effort out from under the Dundalk crossbar.

Stephen O’Donnell made a double substitution at half time in an effort to shake things up- Keith Ward and Steven Bradley joining the action at the expense of the aforementioned Martin and Joe Adams.

However, it was Drogheda United who took the lead less than five minutes into the second half as Dean Williams converted a penalty- awarded after Darragh Nugent had been fouled by Greg Sloggett.

Indeed, they almost doubled their lead on the hour mark as the tireless Foley cut in from the right wing to unleash a vicious shot from distance which cannoned off the crossbar. Buoyed by their reprieve, Dundalk almost equalised but Steven Bradley’s low effort was well stopped by Sam Long- the home goalkeeper displaying the qualities which saw him called up to the  Scotland Under 21 squad earlier today.

Dundalk continued to dominate possession throughout the half but they were restricted to a series of half chances thanks to the home side’s solid defensive rearguard display with the experience of Keith Cowan, Gary Deegan and Dane Massey shining through.

For Dundalk, it’s a first league defeat of the 2022 season as they face into the international break with a single league victory and five draws to their name, while Drogheda United recorded their first clean sheet of the season and are now just two points behind their Louth rivals with a game in hand.