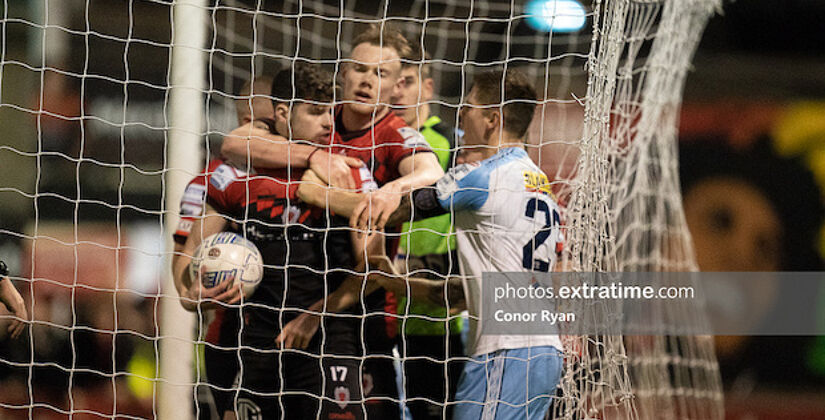 Two late second half goals from Sean Boyd and Grant Horton saw Bohs and Shelbourne play out a feisty 1-1 draw in Dalymount Park on Monday evening.

The opening exchanges were frantic and busy in midfield as both sides looked to settle as quickly as possible into a spicy Dalymount derby atmosphere.

Despite some promising passages of play in attack, the quality and end product was missing at both ends in the opening half.

Ali Coote and Dan Carr both had early chances from distance for their sides with Coote’s effort the closest but at the same time causing no problems at all for Lewis Webb in the Shels goal.

Dawson Devoy and Ali Coote in midfield linked up well in attack with the towering Promise Omochere at the top of that triangle asking plenty of questions of the Shelbourne defence following his suspension.

The best chance of the opening half fell to Jordan Flores from a set piece as Bohs began to stretch the Shelbourne rear guard. A floating corner from Coote to the back of the box was met on the volley by Flores but his final effort was weak to the relief of Webb.

Moments later and Devoy found himself unmarked on the edge of the box with the ball trickling across the box to his feet. He almost had too much time to get his shot away but was blocked brilliantly with a last gasp block at full stretch from Aaron O’Driscoll.

Shane Farrell had a very strong claim for a penalty on the hour mark having looked to have been fouled by Rory Feely just inside the box. Referee Rob Harvey waved away the claim immediately to the dismay of Damien Duff and his players.

A real let off for the home side with the contact looking to be just inside.

Amazingly with his first touch and just seconds after being introduced into the game, substitute Sean Boyd put the visitors ahead with a poked finish past Talbot in between Grant Horton and Ciaran Kelly after some brilliant build up play on the left by Farrell.

A frustrated Feely who had already been booked in the first half was shown his second yellow card in the immediate aftermath of the goal for airing his frustration one time too many for Rob Harvey’s liking.

With just three minutes remaining the Jodi Stand erupted as Horton smashed home the leveller after a goalmouth scramble caused chaos from a corner.

Brendan Graham has had a few stints with Extratime.ie and is back writing with them since November 2017.Brendan is a fan of Bohemian F.C and has been to most of the League of Ireland grounds …