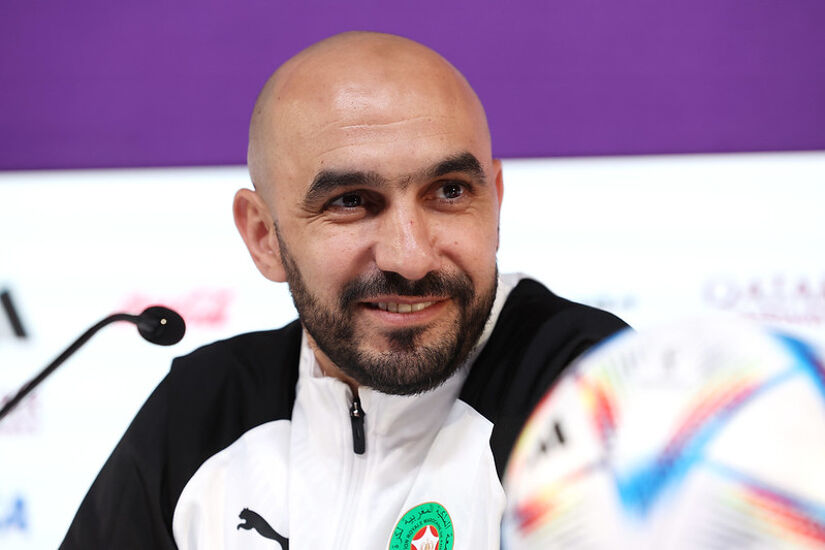 Morocco became the first ever African nation to reach the FIFA World Cup semi-finals as they overcame Portugal in a tense encounter at Al Thumama Stadium.

A first half goal proved to be the difference and the north Africans stood firm for the rest of the game. Not even going down to ten-men late on, or the arrival of Ronaldo, could stop them.

It was more disappointment for the Portuguese side though. They saw plenty of the ball, but were unable to make it tell. Often their final pass left them down and they had a goalkeeper in Bono who saved whatever came his way. It will likely see the final game for many of their older players.

Morocco manager Walid Regragui was forced to make two changes from the penalties win over Spain. Nayef Aguerd and Noussair Mazaraoui both picked up injuries in that game and were unable to regain fitness. Jawad El Yamiq and Yahya Attiat-Allah who replaced them both start.

Morocco went with their 4-3-3 system while Fernando Santos made just one change to his team from the thrashing of Switzerland. Ruben Neves came in for William Carvalho. That meant that hat-trick hero Goncalo Ramos kept his spot ahead of Cristiano Ronaldo.

Both sides looked to get forward in the opening minutes. Joao Felix had an opportunity after a Bruno Fernandes free kick found him un-marked in the centre. Bono had to tip it away. Morocco then won a corner after Yahya Attiat-Allah’s cross was blocked by Diego Dalot.

Hakim Ziyech’s delivery was good, but Youssef En-Nesyri’s header went over the bar. The African side showing greater positivity than against Spain as Ziyech and Sofyan Amrabat rarely giving their opponents much time on the ball.

Portugal were trying to get both Dalot and Raphael Guerrero into the game to pull Morocco out of their tight defensive position. It was the final pass towards them which let many of these moves down. Felix did have another chance from outside the area after a clearance did not get much distance.

It took a deflection off Jawad El Yamiq and went just over. Morocco came down the other end for an opportunity for Selim Amallah. He shot well over though.

It was not that much of a shock then when they went ahead. It was another cross into the area that brought the lead. Attiat-Allah played a one-two on the left with Amallah before the former put in a deep cross towards En-Nesyri who out-jumped both Ruben Dias and Diogo Costa to head home.

This sparked Portugal into life and they were unlucky to not draw level almost immediately. A cross came in from Fernandes that went over the head of Bono, but cannoned off the bar. The midfielder also had a shout for a penalty when he went down just inside the area. It was waved away though.

Morocco almost doubled their lead early in the second half. A free kick was whipped in by Ziyech that caused panic again. It came all the way through to Costa and bounced out. It hit El-Yamiq and went just wide. They were content to stand firm and soak up whatever Portugal had to throw at them.

Especially given their pace on the counterattack. Amrabat and Azzedine Ounahi were tireless in their effort in the middle of the park.

Fernandes was left frustrated by two attempts which just failed to come off. The first went just over while the second was slightly too deep for Goncalo Ramos to make contact with. Santos emptied his bench as he tried desperately for that chance to get back into the game.

The problem was trying to pick apart the rear-guard. Time and again they went left to right without seeking to mix up their approach. The effort put in was palpable when players like Romain Saiss went down with injuries.

Still, they held firm. Bono produced an excellent save to deny Felix as he cut in from the right to release a curling shot destined for the top corner. He also stopped a Ronaldo effort with his legs in a rare opportunity for the veteran substitute.

The announcement of eight minutes injury time, and sending off of Walid Cheddira, did not deter their effort. Portugal did have a massive opportunity into the final minute as Pepe was un-marked but put his header wide.

Massive celebrations for players and fans upon the final whistle. They will take on the winner of England and France at 19.00 GMT on Wednesday. For Portugal it is yet another World Cup disappointment.