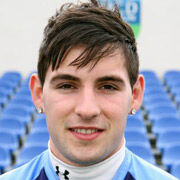 Graham made occasional appearances for UCD in the side that won the First Division title in 2009. As the club moved up to the Premier Division he continued to appear, either wide in midfield or up front, making 24 league appearances in 2010 but failing to hit the net.

But, in 2011 with the departure of so many of UCD's leading lights, Graham had an opportunity to establish himself as first choice striker and in 32 league outings he hit the net nine times, adding two further goals in the EA Sports Cup. The following year Graham scored seven league goals in just 13 league appearances but at the end of the 2012 season he left UCD to sign for Mick Cooke at Drogheda United.

Graham made 21 appearances in the league for Drogheda, although seven of these were off the bench, and he scored twice, in two 2-2 draws against Dundalk and Cork City, as the club finished eighth in the league. In December 2013, Graham signed for Athlone Town for the 2014 season.

Graham went on to score one goal, in a 3-1 defeat to Bohemians, in twenty-one appearances for Athlone were relegated from the Premier Division on the last day of the season.