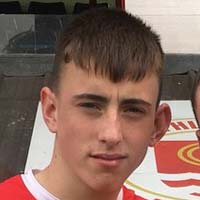 Darragh played for St Patrick's Athletic's U17 side in 2018, and with both their U17s and U19s in 2019. He also made his first senior appearances with the Saints that year, with two Leinster Senior Cup outings.

Darragh's league debut arrived in 2020 in a game against Derry City at Richmond Park on 3 August and in July 2021, Darragh signed his first professional contract with the club.