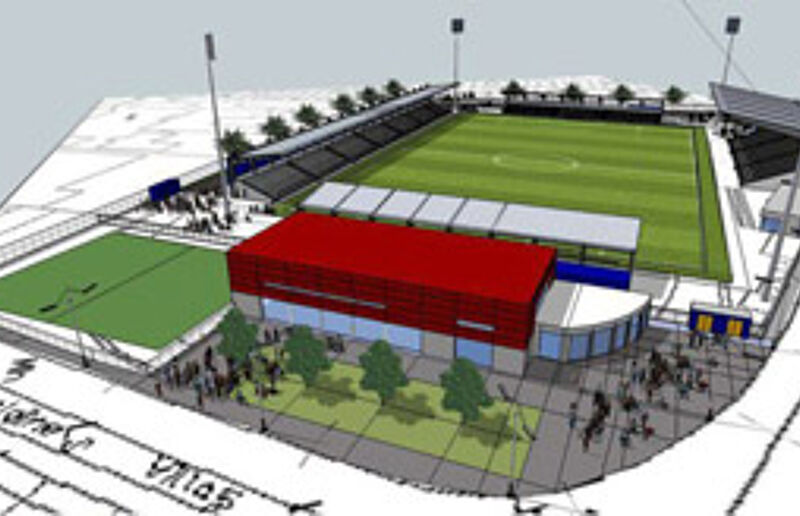 Following a short slideshow presented by a Pat O’Sullivan; chairman of Limerick Football Club, those in attendance; whether they were media or die hard supporters left with an assurance and a sense of anticipation as the Ballylanders native announced the final plans for a return to the spiritual home of Limerick soccer after an exile exceeding twenty years.

The glamour and sheer smell of success was on display for all to see last Thursday evening. The extremely successful Munster franchise was there for everybody to envy; a bitter pill to swallow for those dedicated to the Limerick soccer cause. However, a few short moments later, a new spark would ignite in the European Capital of Sport.

In an evening expected to be about Joe Gamble and Denis Behan, the Limerick public and Limerick based media were dealt a surprise hand. Following the announcement of more community based schemes to further solidify the foundations of the Limerick empire, Pat O’Sullivan took a small pause, almost as if to brace himself. Following this short pause was a stadium plan unveiled; one far more excessive than anyone had ever seen. Mutterings were heard throughout the conference area.
The open planned, refurbished and highly modern stadium took every single soul in attendance by surprise and before they could catch their breath, Chairman Pat O’Sullivan began to speak. He said: “Firstly, we wanted to secure the Markets Field as a home for senior soccer in Limerick, which we have now been able to do due to the kind support of JP and Noreen McManus and the LEDP.”
Further plans were unveiled by O’Sullivan who stated that the ground would capacitate 8,100 spectators in an all-seated environment. For the traditionalists, the “popular side” will now be the biggest stand, running the length of the pitch. It will be the biggest stand and will hold somewhere in the region of 3,000 people within its vicinity.

Two stands will be situated behind either goal; a feature missing in various grounds around the country. The existing stand in the Markets Field, runs parallel to the popular side and will be renovated to match the class on display in the rest of the ground. The design of the existing stand will stay the same however, as it adds a sentimental sense of nostalgia to the ground.

O’Sullivan stated the importance of a community feel needing to be generated around the place and has included this aspect in the design. None of the four stands will be directly connected and will develop a sense of the outside community coming in. The local area of Garryowen is rich in history and has always added the sense of community spirit to the old Markets Field.

The club offices, which will be situated behind the North Stand (behind the goal) according to the graphic, will be the first stage of production and they will be established in the coming weeks. The office building will be state of the art and will neighbour two five-a-side astro turf pitches; which in turn will generate income for the club.

Pat O’Sullivan was quick to point out that the stadium, regardless of where and how it was funded, will be a municipal stadium, and can be used for such upcoming projects as Rugby League in the city.

Phase One of this exciting project will be completed by March 2012 and will have a capacity to hold 3,100 spectators. The floodlit surface will be completely finished and the match day experience will be completely up to scratch. A club museum will be located at the back of the “popular side” as well as a brand new club shop which will stock all of the club’s merchandise.

Located to the left of the main stand will be a bar; a feature that the Markets Field had always enjoyed previously. The bar is an exciting part of the development and adds even more the matchday feel of perhaps, “a day out before going to the football”. It can also be used as a stepping stone for people heading into town; having a few drinks in the Markets Field while watching the match before going into the nightclubs or pubs, which are within two minutes walking distance from the ground.

The surface was a much debated topic for a long time and whispers of an astro turf surface were all but expelled as Pat O’Sullivan explained: “Some clubs, one’s who we would accommodate for friendlies in their pre-season, have a problem playing on certain types of artificial surfaces, so that will need to be addressed.”

The location of the ground, for all that don’t know, or those who will be visiting next season, is a ten minute walk from Jackman Park. It is located right next to St. John's Cathedral on Cathedral Place; a landmark point in Limerick, located a minutes’ walk from the City Centre, making the Markets Field a prime location for sporting fans to flee upon.

Before concluding, Pat O’Sullivan made one thing very, very clear. He said: “We are a non-profit making club. Every single cent the club makes will be put back into the development of the club. We all work for the same goal here; there are no Chiefs at this club, we’re all Indians.”

Exciting times lie ahead for all those fanatical about sport on Shannonside, and one can only feel optimistic about the progression that the senior soccer representative in Limerick has made under the guidance of a leader whose heart is in the right place; Pat O’Sullivan.

While the sob stories of League of Ireland clubs have dominated the headlines in the recent months, the south-west has lit a beacon; laying the foundations of a club who can manage to become self-sustainable. A positive story does exist in the Airtricity League.