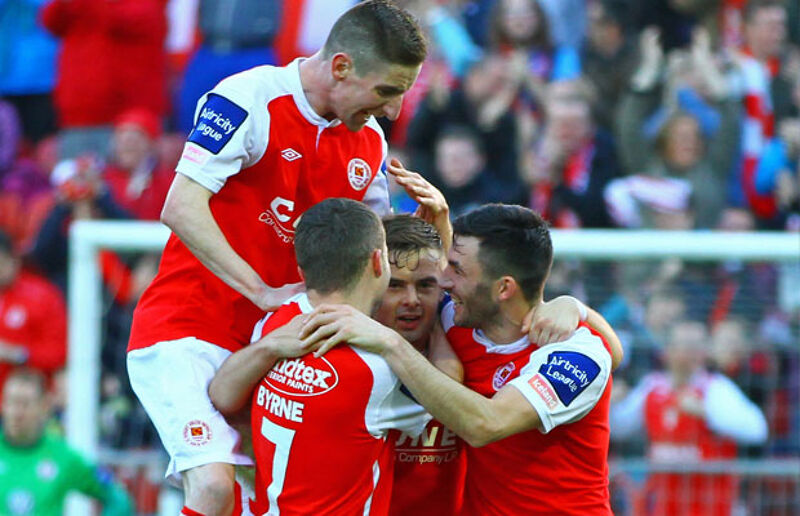 The party began early for St. Patrick’s Athletic on Sunday evening as they claimed the 2013 League of Ireland title with two games to spare after a 2-0 win over Sligo Rovers in Inchicore. Goals from Greg Bolger and Anto Flood won the Saints the game and ultimately a thoroughly deserved championship for Pat’s.

There was a celebratory mood in a packed and rocking Richmond Park all evening, a throwback to an earlier era, the last century to be exact, as Pat’s claimed their first league title for 14 years. “We are going to party like it’s 1999” sang Prince over the PA ahead of kick off and the coronation of the new Kingpins of Ireland was just 90 minutes away. President Michael D Higgins and interim Ireland manager Noel King were in attendance to see Sligo Rovers lose their league of Ireland crown.

Some had questioned Pat’s ambitions at the start of the season but Saints boss Liam Buckley always had the belief that his squad could claim the title. The addition of Killian Brennan at the beginning of the campaign and Daryl Kavanagh mid-season were the catalyst for the championship win but the ingredients were already there in Richmond Park from the last campaign.

Sligo had started the season with eight league wins in a row but Pat’s ended that run with a 2-0 win in Inchicore back in April. Ian Baraclough’s men had qualified last weekend for the FAI Cup Final and were looking for a win over the Saints to keep their slim double chances alive. Pat’s knew after Saturday’s late drama in Dalymount, with Dundalk’s Stephen O’Donnell missed Panenka penalty, that all they needed was a point to effectively claim the title thanks to their superior goal difference. A win though, would guarantee them it and that is what the Pat’s faithful sought from their team.

It was Sligo though who created the best openings in the first half an hour of the game. Alan Keane got forward on the right and cutting inside his fourth minute shot brushed the top of Kavanagh’s head but didn’t deviate enough to take it past Brendan Clarke in the Pat’s goal. An Evan McMillan header, a Kieran Djilali shot spilled by Clarke and another header, this time from Gavin Peers, had Pat’s fans were wondering would their team wake up and get into the game.

They needn’t have worried though as the roof was lifted off Richmond Park in the 33rd minute. Greg Bolger has been influential all season for the Saints with his measured passing and defensive cover in front of the back four but this time it was his goalscoring that helped Pat’s. His effort from 25 yards out flew past Gary Rogers into the top corner of the net. A great time for him to score his first league goal of the campaign and what a shot to do it with.

The game turned on that goal and Pat’s piled on the pressure in the remaining time in the first half especially. Kavanagh and Ian Bermingham both got in each other’s way before Bermingham lifted the ball over the bar with a shot. A Brennan free kick was beautifully turned around the post by Rogers but the coup de grace came three minutes before the break. John Russell’s penetrating run into the box allowed him to roll the ball to Flood who tapped home from two yards to make it 2-0 at half-time.

It may have been a bit presumptuous of the Pat’s PA to play the theme tune to the Champions League during the break or have Queen’s “We are the Champions” playing as the team’s emerged from the tunnel for the second half but the result wasn’t going to read any other way.

Rogers was required to save Anto Flood’s low shot on the hour mark. Anthony Elding came off the bench for Sligo but he hasn’t been able to find the form that propelled the Bit O’Red to their early league lead before slipping back. His first touch saw him get a shot away that Clarke easily dealt with. The ‘keeper did really well on 73 minutes with a double save from Keane and David Cawley to snuff out any Sligo comeback.

Even when the Pat’s netminder made a mistake with an awful attempt at a punched clearance, man of the match Bolger was on hand to get back and clear the ball over the bar just as it looked like it would go over the line.

Referee Alan Kelly’s final whistle sparked a joyous pitch invasion and you couldn’t begrudge the Saints supporters for that. They will see their team collect the league trophy at next week’s home game against Derry City while Sligo hope to get their hands on some silverware of their own in the upcoming FAI Cup final. But the night, and the season, belongs to St. Patrick’s Athletic who picked up their eighth league crown, as the Super Saints became the 2013 League of Ireland champions.