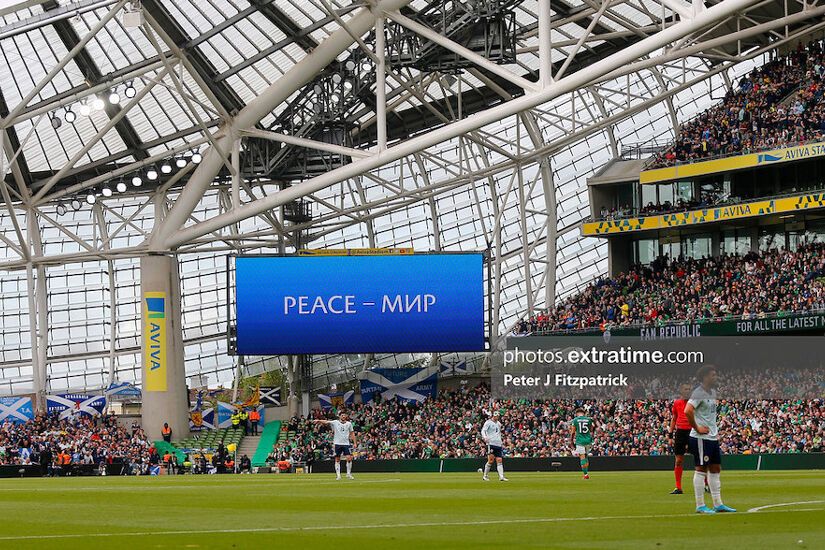 The Scottish team seem intent on extracting a modicum of revenge this evening following Ireland’s comprehensive 3-0 victory over Steve Clarke’s side on Lansdowne Road last June.

However, tonight’s game in Hampden Park (kick-off 7.45pm) has the more important matter of promotion out of Group B of the Nations League at stake.

The Scots currently top the group ahead of this evening’s game and their ‘away’ match against Ukraine in Poland next week and they will be looking to take a position in the top tier of the Nations League in the week that England were relegated from it.

The Scottish side struggled in Dublin last June when pressed to play so many games in quick succession and having won well against Ukraine 3-0 at Hampden Park earlier in the week (through a John McGinn goal and a Lyndon Dykes double) they now  face a fresh Ireland side on Saturday evening.

"We just need to treat the Republic of Ireland game the same as how we treated Ukraine,” said Clarke ahead of the game. “We need to try and get the three points and make sure that when we go to Ukraine we are still in a good moment, still feeling good about ourselves and looking for the one point to qualify.

"We’ve still got everything in front of us. You could get carried away looking at what we could achieve – let’s just concentrate on the next game and try to make the next step forward. We want to build a culture where everytime we go to the pitch we want to win the game.

"I think we have shown that consistently with an eight game unbeaten run. We want to build that type of run again.

Clarke can’t call on either Nathan Patterson or David Turnball who are injured and he has called u21 skipper Josh Doig and St Mirren centre-back Declan Gallagher into the squad.

Promotion out of Group B won’t be easy for Stephen Kenny’s side – they will need to win both in Scotland on Saturday night and Tuesday’s home game against Armenia to have any chance to topping the group.

"Scotland were very good the other day,” said Kenny reflecting on their win over Ukraine. “They played very well and to be honest with you, they’ve been very good since Steve Clarke took charge and qualified for the Euros.

"They’ve consistently been good so anything we get, we know we’ll definitely have to earn that. For us, we have to focus on ourselves and make sure we’re right, that’s what we are firmly focused on. You have to adapt for sure, you can’t play the same way, you have to adapt to your opponent. That’s the nature of football.

Speaking ahead of the match, John Egan described the upcoming encounter as “a tough game” but a match that “you want to be involved in.”

The Sheffield United defender said: “We're here to do a job and get an important three points, and with a big travelling support behind us, we're really motivated.”

Goals from Alan Browne, Troy Parrott and Michael Obafemi earned a “fantastic” win over Scotland during the summer, in what was remarkably Ireland’s first win in the Nations League.

Egan said: “We were brilliant that day (against Scotland) and the quality of goals were great, but we need to try and produce a similar performance tomorrow. Scotland are a strong side and I watched the Ukraine match in the midweek and they showed how difficult they will be as opposition."

MATCH STATS
The last time Ireland played in Hampden Park, the Boys in Green won 2-0 in February 2003, in what was Brian Kerr’s first game in charge of the Irish national team. Kevin Kilbane and Clinton Morrison scored the goals that night.

Scotland have won one of their last five matches against Ireland (drawing one and losing three), though it was the last time they hosted this fixture, back in November 2014 in a Euro 2016 qualifier. Shaun Maloney got the winner 15 minutes from time.

John McGinn has been involved in 14 goals in his 16 home starts for Scotland under manager Steve Clarke (11 goals, 3 assists).