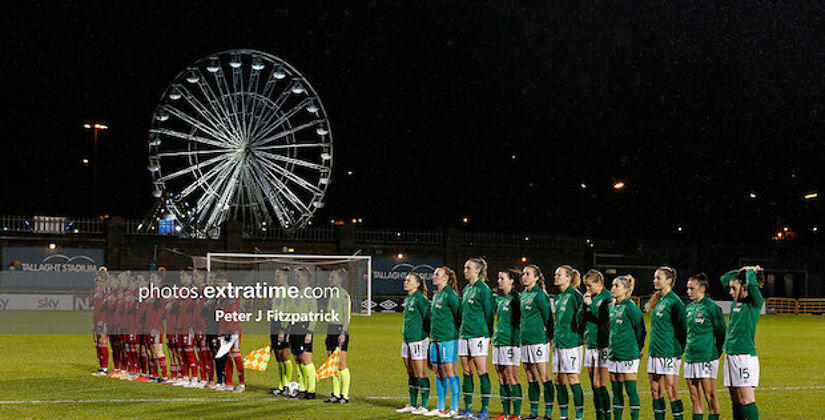 Having had a fairly facile 15-0 away win in Georgia last week, Sweden know they just need a point from Tuesday’s game in Gothenburg to qualify for next year’s World Cup (kick off 17:30 Irish time / 18:30 local).

In the way to securing early qualification is a Republic of Ireland side that the Swedes could only get by 1-0 in Tallaght Stadium last October in Ireland’s first qualifier of the campaign.

Swedish boss Peter Gerhardsson feels that the experience of the game in Dublin against Ireland will be beneficial as they look to make it seven wins from seven in this qualification group.

“We had seen them but we hadn’t met them before,” said Gerhardsson speaking on the eve of the game to the assembled Irish and Swedish media. “It’s very important for us to have that knowledge ahead of tomorrow.

“Sometimes in club football, when you have two games against the side, you scout them and view them before but when you’ve met them once, it’s easier.

Swedish skipper Caroline Seger, who missed the match in Dublin, is back in the squad.

“It was a tight game (in Tallaght), only 1-0 and they pushed for the equaliser,” said Seger when speaking about the last meeting between the teams. “They have developed a lot.”

The captain made her debut back in 2005 and has played over 225 times for her national side across several iterations of the team. When asked is this the best team she has played in, she laughed and said “I have to say yes!

“No, but we have a lot of players with so much experience. We have a chance to play a long time together, knowing each other on and off the field. I hope I sit here after we win the Euros (this summer) and say that I was right, that this is the best team.”

Swedish boss says his ‘humble’ team have ‘ambition to be the best in every moment’ https://t.co/8WwIdgCd2W pic.twitter.com/DAcw5KHARr

A tough task awaits Ireland in Gothenburg on Tuesday as they look to take the first points off Sweden in this World Cup qualifying campaign.

A draw would be a superb result for the girls in green but in reality even a close defeat – like the 1-0 loss in Dublin – would be something that Pauw’s side can build on as they look to secure second place above Finland and Slovakia.

The Swedes have won all six of their qualifiers to date, scoring 26 goals and conceding just the one.

"It is very difficult to score against them,” said Ireland boss Vera Pauw speaking to the media on Monday evening.

“Of course we have our game plan but also we are very realistic. If we could score, it would be massive for our game.

“Sweden are second in the rankings, Olympic finalists and arguably the best team in the world.

“We are ranked 30, so know what we’ll face. We know they are a fantastic team, especially with all the players back in the squad. They are full strength.”

Runners up spot will provide a playoff route to the finals albeit via a very convoluted process. There are nine groups and each runner-up will take part in the play-offs scheduled for October 2022. The three best runners-up will be seeded directly to round 2 while the six remaining runners-up contest three single-leg play-offs in round 1. The three winners from round 1 and the three teams seeded directly to round 2 will then compete in single-leg play-offs.

Captain Katie McCabe says chaos is in the past with credit to go to players who fought for women’s football in Ireland https://t.co/6Zkg3QticL pic.twitter.com/XFLnVaIATN

Ireland are ranked 30th in the world rankings while Sweden sit second in the rankings.

This match is Vera Pauw's 20th in charge of Ireland and she has 8 wins along with 2 draws. Her team have scored 31 times and conceded 24.

Sweden’s 15-0 win last week eclipsed their second highest ever win – which was against Ireland in 1992. Their best ever result was a 17-0 win against Azerbaijan in 2010. The sides have played each other seven times with Sweden securing six wins and the other match ending in a draw.

We are at the Gamla Ullevi Stadium in Gothenburg today ahead of tomorrow's 2023 World Cup qualifier between Sweden and the Republic of Ireland. We will hear from both camps during the day. Sweden were out on the pitch training this morning. pic.twitter.com/LCOajVv9Tb