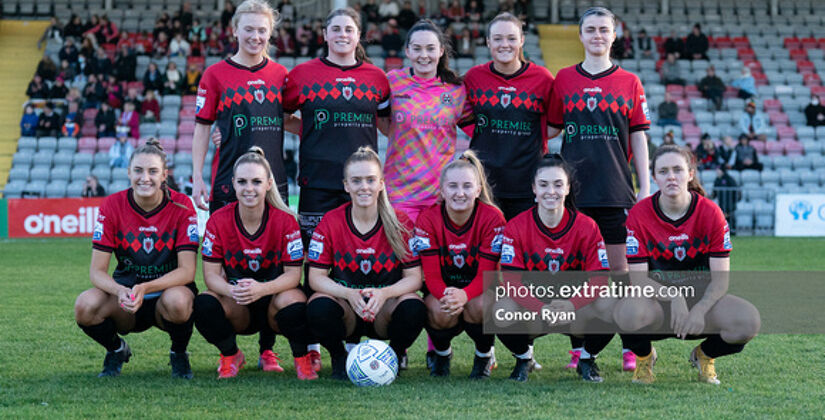 Steve Feeney’s side are in sixth place in the WNL with the Bit O’Red two points ahead of Bohemians currently.

They’ll be keeping an eye on the teams below them, with just three points between them and the bottom of the table with three games of the season played.

Sligo had an opportunity to get their first win of the season last weekend which they took by defeating Cork City at Turners Cross.

Gemma McGuinnes and Emma Doherty scored in the second half of last week’s game which was enough for a historic first ever win in the WNL for Sligo, despite Cork pulling one goal back through Nadine Seward.

As good as that win was for the Bit O’Red they will have to improve defensively as they have conceded ten goals in their first three games which along with Treaty United is the most conceded in the WNL so far this season. They will need to keep the Bohemians attack at bay to make sure they can claim a victory and stay ahead of the teams below them in the WNL.

“We take on a strong Bohemians team in The Showgrounds Saturday, Bohemians have faced 2 of the top 3 from last season in their opening fixtures and posed plenty of problems for those sides so we know we face another big challenge this Saturday.”

Bohemians will be looking for a first win of the season when they travel to The Showgrounds on Saturday afternoon (kick-off 2pm).

The Gypsies have had a mixed start to the season but they will be looking to secure a result this weekend to ensure they don’t drop to the bottom of the table in place of Cork City and Treaty United.

A wonder-strike from Ellen Molloy and two from Ciara Rossiter gave the current FAI Women’s Cup Champions the three points on the day, but Sean Byrne’s side can take heart from staying in the game and creating a number of chances against one of the strongest teams in the country.

This is the first time the Gypsies have faced WNL newcomers Sligo Rovers in the league and given that Bohemians are into their third WNL season they should be eyeing up this game as one they may be able to get something out of.

Not only would a win help keep Bohemians from dropping to the bottom of the table, they also have an opportunity to leapfrog Sligo Rovers into sixth place.

The Gypsies will be looking to secure a first league win since September 2021 when the defeated Cork City.