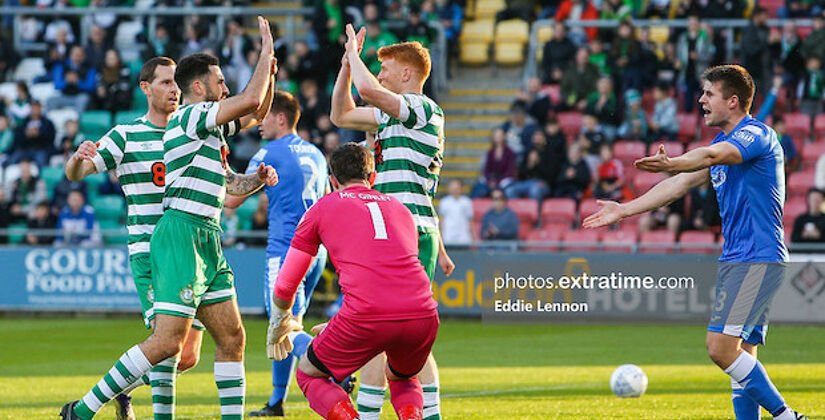 Last season Harps secured their first win over Shamrock Rovers since 2008 and they could really do with another victory over Rovers if they are to ease their relegation worries.

Ollie Horgan’s side have won just the two games this season and sit in the relegation play-off position in the Premier Division.

They are only three points above basement side UCD with a ten point gap on Drogheda United directly above them in the table.

Harps showed remarkable resilience to earn a point in their last game as they came from two goals down to draw at home against St. Patrick’s Athletic.

Ethan Boyle was the hero netting the equaliser in the 93rd minute. However, Boyle has accumulated eight yellow cards and so must sit out this game against his former club.

Hoops Head Coach Stephen Bradley was talking up the opposition as is often the style of Harps boss Ollie Horgan but Rovers got a bloody nose when they last travelled to Ballybofey so Bradley’s talk of being wary of Harps doesn’t ring hollow.

“Their attitude is brilliant, they never stop and they never stop fighting,” said Bradley. “We saw that last Friday against St. Pats when they were 2-0 down until the 87th minute, but they kept going and might have felt that they could have won it in the end.  We will go and respect them from the first minute until the final whistle.

“They have some really dangerous players in the attacking part of the pitch with Barry McNamee, Ryan Rainey and Eric McWoods. We have to make sure that we are ready for them.”

The home side will also have Bastien Hery available after he missed last week’s dramatic game against the Saints due to suspension.

The Hoops have been almost imperious in Dublin derbies this season with nine wins from the ten matches they have played home and away against Bohs, Pat's Shels and UCD but on their travels outside of the capital it is a different story - they have claimed just the one win on the road from their six games in the sticks.

They have lost four matches this season – each by a single goal – and three of those have come from matches played outside of their home county (a 2-1 defeat in Derry and 1-0 losses in Louth to Drogheda United and Dundalk).

Their solitary win outside of Dublin came in a 3-0 victory against Finn Harps in Ballybofey exactly three months ago.

They come into Friday’s game in Finn Park ten poinst clear of second placed Dundalk who have two games in hand.

Over four days Rovers made it back-to-back Dublin derby wins beginning by dispatching Bohemians 1-0 in Tallaght last Friday before extracting revenge on Monday against the only Dublin side that had beaten them this season. Their 2-1 win in Inchicore cancelled out St. Patrick’s Athletic 1-0 home win back in March.

“It was a good weekend, winning two Dublin derbies,” was Hoops Head Coach Stephen Bradley’s assessment. “We knew it was important to pick up six points, so we’re very happy. The players were brilliant, they really stepped up and secured the six points that we wanted.

Scoreless at the break the Hoops opened the scoring with a ten pass move that began at their cornerflag before Andy Lyons raced from that position to the other end of the pitch to slot home Aaron Greene’s cross for his sixth of the season. Greene then converted with a fabulous individual goal before Tunde Olowabi won a late penalty for Pat’s that was converted by Eoin Doyle.

“Andy’s goal is a really good team goal, worked right from the back with some really good play and movement in the build-up. Aaron’s one is a bit of individual brilliance, Rory does well to get it to him, and Aaron looked like he has nowhere to go. Then he beats two men before putting it into the net, a fantastic goal.”

Olowabi was with Harps last season and he scored the winner when Rovers last played in Finn Park in the 2-1 victory for the Donegal side.

“We went there last year, and didn’t show up, and they beat us quite comfortably,” recalled Bradley. “We know that if we don’t go there with our very best that we will get turned over, so we will go there and give Finn Harps all of the respect that they deserve and make sure that we are ready for the game.”

After Friday’s game in Finn Park, the Hoops will welcome Maltese side Hibernians to Tallaght Stadium next Tuesday for the first leg of their Champions League first round qualifier.

“Our aim was to go into Europe with nine points from these three games. We’ve set ourselves up for that, but we need to make sure that we do our business right and wake up on Saturday morning with another three points on the board and then we will focus on Europe.”

MATCH STATS
Last season Rovers beat Harps twice – 2-0 away in April and 3-0 at home in October on a night the secured their league title. There was the 2-1 win for Harps in September while the other game ended 1-1 in Tallaght.

Graham Burke and Danny Mandroiu are top scorers for the Hoops with seven goals each.

Gary Cronin: ‘I knew the merger was coming and that wasn’t for me. The right thing to do was move on.' https://t.co/VKPx8lbwQn pic.twitter.com/VeReJpEqyt