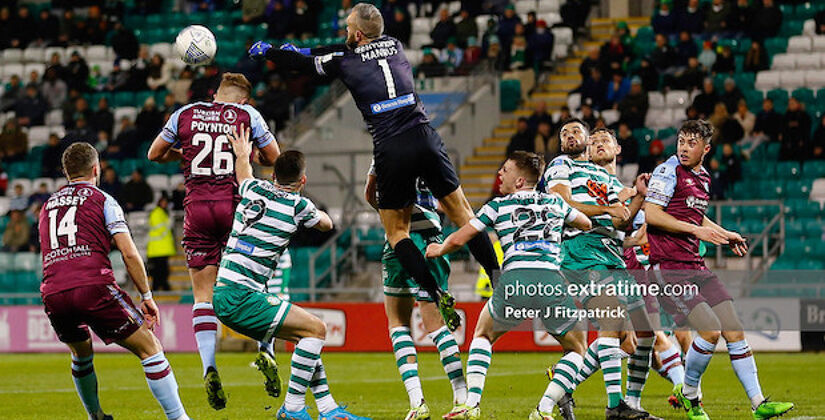 The home side come into the game on the back of a brilliant come-from-behind ten man victory against Finn Harps last Friday.

It ended a run of four straight defeats and was United’s first home win since mid-March.

The victory for Kevin Doherty’s team moved them six points clear of Harps who are situated in the relegation play-off position in the Premier Division.

United face a tough task on a four day turnaround against back-to-back league champions Shamrock Rovers – who come into the match with an extra days rest after their 3-0 away to UCD.

Doherty will be without Sean Roughan who is suspended following his red card received last Friday after he picked up his second yellow card on 65 minutes. At that stage the Boynesiders were trailing 1-0 to a Conor Tourish goal scored two minutes into the second period.

However, United dug deep to level on 67 minutes through substitute Evan Weir before Adam Foley gave them a lead on 90 minutes. Foley then turned provider giving the assist to Darragh Nugent who wrapped up the win with a goal six minutes into injury.

However Drogheda will be without Nugent on Monday as he is illegible to play as part of his loan agreement with his parent club Shamrock Rovers. Former Hoops Dean Williams is a doubt due to injury.

When the team last met, the game ended with a 3-1 win for the Hoops in Tallaght.

Sean Gannon and Jack Byrne put Rovers 2-0 up at the break.

Evan Weir pulled a goal back for Drogheda just after the hour mark before Graham Burke secured the win with a goal nine minutes from time.

The Hoops travel up the M1 from Tallaght to take on Drogheda United on the back of a 13 game unbeaten stretch including wins in their last four games.

Three first half goals gave them a win away to UCD last week.

“I thought in the first half we were very good,” said Hoops Head Coach Stephen Bradley reflecting on the 3-0 win over UCD when speaking to his club’s media team.

“We obviously scored three quick goals, maybe could have added a couple more and we're happy with the clean sheet, the three points and the performance.”

With Derry City losing at home to Dundalk on Friday night, Rovers remain top of the table seven points clear of Candystripes in second place and with a four goal better goal difference from City.

“You'd always like to add more goals but 3-0 away from home and a clean sheet, with a busy schedule of three games in a week. You take that, you move on and you're happy.”

The Hoops won on both visits to Drogheda last season – but only by a one goal margin on each occasion.

“They won't make it easy at all. It'll be a difficult game like all games in this league are. We've just got to make sure that we respect that and we're ready for whatever they bring to the game.

“I saw them on Friday against Finn Harps and they had a good win. It was a difficult game between two teams that were trying to cancel each other out but they came out on top. It'll give them a lot of confidence coming into the game.

“We saw with the three goals that they scored that they have some good players in the attacking part of the pitch.

The Hoops have two players on seven goals so far for the season (Graham Burke and Danny Mandroiu) while the Boynesiders have three players topping their goalscoring chart. Dean Williams, Evan Weir and Chris Lyons all have three league goals.

The last win for Drogheda United over Rovers’ first team in competitive action came in July 2018 when the Drogs dumped the Hoops out of the FAI Cup with a 1-0 home victory.

Unavailable: Darragh Nugent (as on loan from Shamrock Rovers)

Joey O’Brien pleased with JOB Shelbourne did on the Saints https://t.co/9H3UJFp3VC pic.twitter.com/xOd8jfnFZt