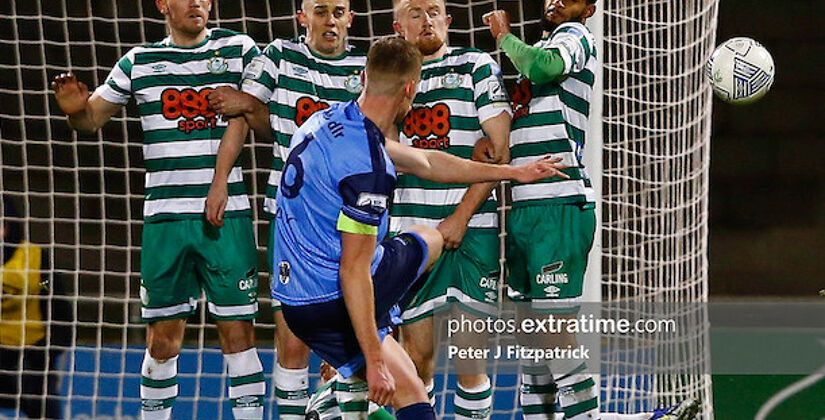 The Students welcome the champions to Belfield on Thursday night with renewed hope they can pull off a great escape after notching their first win of the season away to Finn Harps last Friday.

UCD moved to within two points of the Ballybofey side in the relegation play-off spot after Liam Kerrigan’s expertly placed header gave Andy Myler’s charges their first win of the season at the 15th time of asking.

The victory came at a cost after star forward Colm Whelan departed just after the hour mark and their worst fears were reality when it was announced he would miss the remainder of the season with a cruciate ligament injury.

The in-demand striker’s summer move is now on hold and the Belfield side will have to plan without him heading into the teeth of the Premier Division season.

UCD have taken four points from a possible six after they came back from 2-0 down to snatch a point from Dundalk at the Bowl a fortnight ago. Whelan came up trumps with a brace that night.

Shamrock Rovers travel to Belfield after laying down a marker in the title race following last week’s 1-0 win over nearest challengers Derry City at Tallaght Stadium.

Danny Mandroiu’s goal was enough to separate the side and move the hoops four points clear at the summit and the magnitude of the win was not lost on Stephen Bradley’s side this week.

"Yes, there was obviously a really good atmosphere in the dressing room and in training in the days after. It's still early, we know that but it's an important win,” said the Rovers boss.

The defending champions travel to UCD unbeaten in their last dozen league games and despite facing the basement side, Bradley is wary of their recent upturn in form.

"Their last few games, when you watch them back, they've been very good. I'm sure they'll feel unlucky not to win the game against Dundalk and they obviously had a good win on Friday. They've been good the last few weeks so they'll come into the game full of confidence.

"Of course, we have to go there and respect what they're going to bring to the game. We've got to be ready for that and impose ourselves on the game as quickly as possible. Our aim is to go there and win three points and keep this run going."

On the injury front, Bradley hopes to have a fully fit squad for tomorrow night after Lee Grace was absent last week and Sean Gannon came off with a knock on Friday.