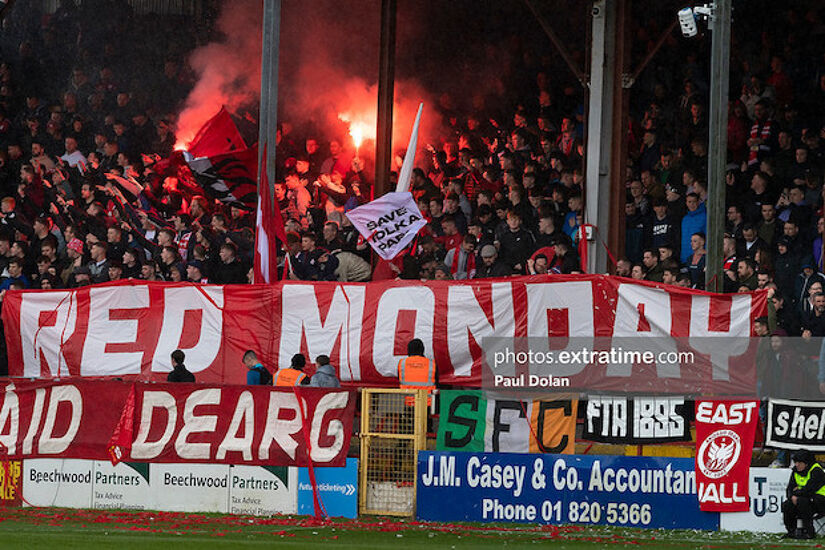 Shels are looking to make it back-to-back wins in Tolka Park with a victory over Drogheda United on Friday Credit: Paul Dolan (ETPhotos)

It took the Reds 14 games before they recorded their first home win of the 2022 season but they finally picked up their first three points at Tolka Park when they defeated Sligo Rovers 2-1 last Friday.

Their other three victories were all achieved on the road and the win over Sligo Rovers leaves them in seventh place in the league table on 15 points, one place and two points above their opponents this weekend.

They fully deserved their win over the Bit O’ Red with two first half goals from Jack Moylan and Sean Boyd having them 2-0 ahead at the break.

Sligo did pull one back courtesy of an excellent Paddy Kirk strike in the 65th minute but Sean Boyd should have relieved the Shelbourne nerves in the 71st minute when he had two opportunities to score his second of the night only to see Rovers’ keeper Ed McGinty pull off a miraculous double save.

Shelbourne manager Damian Duff had to serve out the first of a three-game ban against Sligo Rovers but he was more than impressed with his charges as he watched from the stand with Joey O’Brien taking over dug out duties.

Duff said: “I was over the moon. It’s what the boys deserved after a nervy last few mins and a poor goal from our point of view but we got over the hurdle.

“Now it’s about can we get two on the bounce. No one below us has done that. Positive results on top of each other can help you climb the table and it goes the other way too,” he added.

“Look it’s against someone close to us in the league so it’s absolutely massive,” Duff said.

Shels will be without Brian McManus and Daniel Hawkins through injury while doubts remain over Adam Thomas and Jordan McEneff who both missed last week.

“It must be said our squad has coped brilliantly throughout the season because we’ve missed bodies during it,” Duff said.

The Boynesiders have been beaten in their last three matches and now drop down to eighth place in the league table following their most recent defeat, a 4-0 drubbing at the hands of St. Patrick’s Athletic last weekend.

The defensive component of his team will be the most concerning for manager Kevin Doherty, as they have conceded 11 goals in their last three games.

Two of the last three matches resulted in them conceding four goals on each occasion, with Dundalk as well as Pat’s both finding it relatively easy to break through their defensive structure.

They got off to the worst possible start against Pat’s, conceding their first goal to Billy King after only four minutes. It was 2-0 at half time after Eoin Doyle added a second and the second half was no better as Drogheda keeper Sam Long had to pick the ball out of the net again after two more goals from King and debutant Kyle Robinson.

Speaking to the media this week Doherty was well aware of their defensive facilities, he said: “We’ve lost our last three games and conceded way too many goals, so we have to get back to what we were doing. It’s only a couple of weeks ago that we were on a good run.

“Probably conceding the first goal so early against Pat’s was a bit of a knock to the confidence when we’d been working on a game plan all week, but in general I don’t think a lack of confidence is an issue.”

Striker Chris Lyons twisted his knee early in last week’s game and had to be substituted, but the injury isn’t as bad as first feared and it’s also hoped that Keith Cowan will be passed fit.

But the Shelbourne game comes a bit too soon for Darragh Markey and Adam Foley who are on their way back from injury.