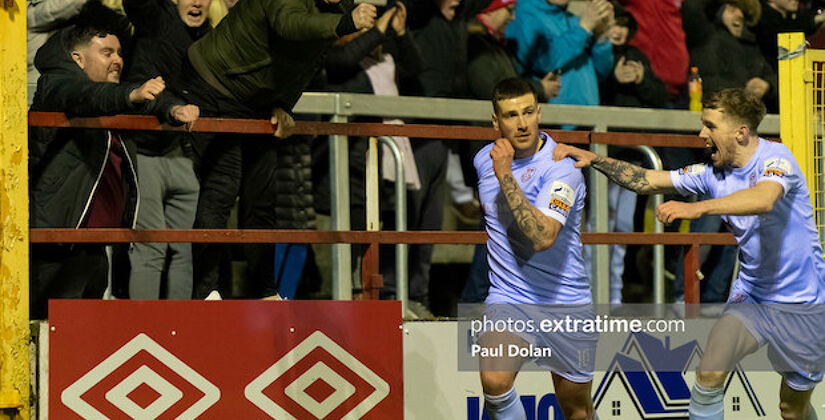 The Candystripes pre-season tag as potential title winners has proven to be well founded as they currently sit on top of the table at the quarter way stage of the league, six points ahead nearest challengers Shamrock Rovers.

They are the only unbeaten team across both the Premier and First Divisions after nine series of games. It is unlikely however that they will match the record of their next opponents, Shelbourne, who went 18 games unbeaten in the 2021 season, albeit in the less demanding environment of the First Division.

City lost two key players to season long injuries early in the 2022 campaign, Ciaron Harkin with a ruptured ACL and more recently Michael Duffy with a fractured tibia. These setbacks have not impacted Ruadhri Higgins’s drive for the league title so far, and it remains to be seen if Higgins will look to strengthen the squad in the July window when the inevitable second half of the season fatigue sets in.

They are currently on a six-game winning sequence, including the 1-0 victory away to Friday night’s opponents Shelbourne when Patrick McEleney netted the winner in the 73rd minute of a tight game.

Their last game was away to North West neighbours Finn Harps where goals from Cameron McJannet and Will Patching saw them secure a 2-1 win to bring them to 23 points in the table.

Higgins is well aware of the threat posed by Friday night’s opposition, a point he referenced during his press conference in advance of the game. He said “Anybody who thinks that this is anything other than an extremely difficult game can forget about it.

“Shels are a very well-coached, well-organised team and you only have to look at their results to see that.

“In terms of goals conceded away from home, there can’t be any better records in the league, that’s for sure.

“We will have to be patient- all of us- players and supporters. They will be very hard to break down but they are also very dangerous on the counter.”

The Reds have found the Premier Division to be a much tougher proposition that the First Division and at times have struggled to cope with the demands of the new environment.

They have hovered around the seventh position in the league table since the season started, and currently sit on the same points as Drogheda United, only slightly ahead of basement clubs UCD and Finn Harps.

Goalscoring has proved to be their achilles heel so far this season, scoring only six goals in nine matches, just one more than bottom club UCD.

They did manage a very good goal in their last outing, a home game against Shamrock Rovers in a packed Tolka Park last Friday night, but it was not enough to get them any points as Rovers scored two goals to emerge 2-1 winners thanks to an 88th minute winner.

Of equal concern to manager Damian Duff however will be their first half performance against Rovers, where they seemed well off the pace and were lucky to be only 1-0 down at the half time break.

They did improve significantly in the second period, aided by that Shane Farrell goal in the 59th minute, but will need to get out of the blocks much quicker for the rest of the season, particularly against the top teams like Rovers and this Friday night’s opposition Derry City.

Shelbourne boss Damien Duff spoke to the media during the week and said he is pleased to have almost a full squad to choose from ahead of a “massive three days” for the Reds.

As well as the Derry City game on Friday, Shelbourne then welcome Bohemians to Tolka Park on Monday.

“It’s the first time we’ve had nearly everyone available for selection which is amazing really,” Duff said.

“We’re looking forward to seeing the fans up in Derry and in Tolka on Monday. We know we will need them at times but the onus is on the players to get the crowd going too.”

Shelbourne welcomes back Jack Moylan, JJ Lunney and Brian McManus who are all available for selection once more.

The Reds will be without JR Wilson through suspension but Duff says competition for places is fierce.

“There’s an opportunity there for someone else to come in and impress. It’s quite a specific position which Conor and JR have obviously done well in but you have seen last week with Ledwidge coming in and going well there when he moved into how players can adapt,” Duff told shelbournefc.ie.

Shels have trained on their astro all week with Derry’s artificial pitch in mind and Duff says his players are well able for the different challenge.

“The one thing on which we pride ourselves is our fitness and that will enable to us to cover the extra miles on the bigger pitch so it will not be an issue.”

Derry City emerged victorious in the first clash between the two sides back in early March, Patrick McEleney’s goal separating the two sides in the 1-0 for Derry City.