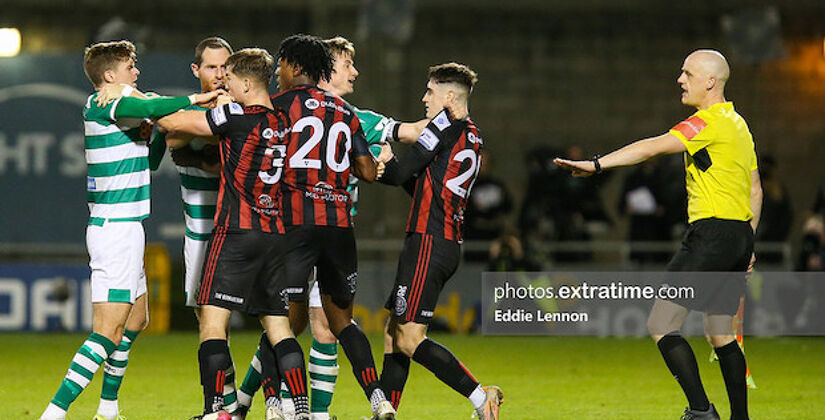 Shamrock Rovers and Bohemians will once again renew acquaintances as the Dublin rivals meet for the first time this season.

Stephen Bradley’s side are one point ahead of their northside rivals, with one more game played and come into tonight’s clash off the back of a 1-0 loss to St. Patricks Athletic last week.

Bohs last suffered defeat in Tallaght Stadium in April last year and are unbeaten in their last four games against the Hoops, winning three.

Speaking to shamrockrovers.ie Bradley is wary of the challenge provided by Keith Long’s side.

“Having watched their last few games, they’ve done well,” said the Hoops Head Coach. “We know that they’ll bring a different game to us than in their previous games, so we have to respect that and be ready for them.

“It’s another derby to look forward to, and another massive crowd in Tallaght which is brilliant to see. And like I said, we’ll just focus on what we do, bring that level again, go a little bit more and the result will look after itself.”

Tickets for tonight’s game are like gold dust, with 7,500+ sold out well in advance. This will be the second sold out Dublin derby Rovers will play in a week.

“We’ve come from a sold-out Dublin Derby last weekend to another sold-out Derby this weekend. They are the type of games that you want to be around and involved in; they get you excited. It’s great to see that we’re playing in front of sold-out crowds every week,” said Bradley.

Bohs will face their toughest test yet of the new season with a visit to the champions. Unbeaten in their opening three games, a win against St. Pats, together with two draws against Dundalk and Finn Harps, has made it a steady opening start for Keith Long’s side.

After last week’s dismissal, centre forward Promise Omochere is unavailable, which could see Ryan Cassidy deputise in the absence of both Omochere and the injured Junior Ogedi-Uzokwe.

Flying Scottish winger Liam Burt could return to the fold after injury, and he could be up against former Bohs full-back Andy Lyons who looks set to start at left-wing back.

Canadian winger Kris Twardek has impressed in the opening games of his second spell back at the club and will be expected to take up position on either the left or right wing.

Speaking to RTE.ie, Twardek looked ahead to the derby.

"It’s the start of the season and you have two teams with optimistic views for the year ahead. Rivalries aside, you just want to win at this stage of the season," said Twardek.

"It is too early to make judgments as to where teams are at. Things will shape up after 15 games or so. For us, if we can beat the top teams - obviously St Pat’s was a great result - then it is a great confidence boost for us to move forward.”

In their four league meetings last year, Rovers won one, with one draw and two Bohemians wins.

Bohs knocked the Hoops out of last season’s FAI Cup thanks to a goal from Andy Lyons. He will don the Hoops tonight in his first meeting against his old club.

Danny Mandroiu, Roberto Lopes, Dylan Watts, Andy Lyons and Aaron Greene all donned the Bohemian red and black before moving across the Liffey to play for Rovers.

The first game played between the two sides was a Leinster Senior Cup fixture on Saturday, 9 January 1915. The game, staged at Dalymount Park, finished 3–0 to Bohemians.

Shamrock Rovers achieved their first victory over Bohemians when they defeated them in the semi–final of the FAI Cup in 1921–22.