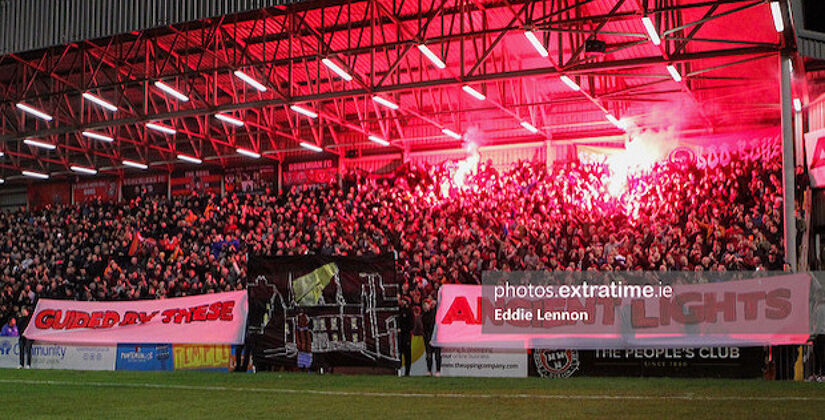 Bohemians will be looking for their first win of the season when they host St Patrick’s Athletic at Dalymount Park on Monday night (kick-off 7.45pm).

On Friday night the Gypsies got their campaign underway, a week late mind after their fixture against Sligo Rovers was cancelled due to inclement weather last weekend.

Bohs faced Dundalk on Friday, and Keith Long’s side took the lead twice only to be pegged back by the Lilywhites both times for a share of the points.

Jordan Flores and Promise Omochere scored for the Gypsies, but Patrick Hoban and Steven Bradley made sure Dundalk would earn a point on the night.

Bohemians will have a point to prove on Monday night after their last meeting with the Saints ended in heartbreak at the Aviva Stadium in November with the Gypsies losing the FAI Cup Final on penalties.

They had a full squad to choose from on Friday night and if they have everyone available again on Monday night they’ll provide a stern challenge for the Saints.

The Saints suffered their first loss of the season when they hosted Sligo Rovers on Friday night.

Tim Clancy’s side went two goals down after Colm Horgan and Aidan Keena put the Bit O’Red ahead, Tunde Owolabi got the Saints a foothold late in the game, but Sligo held out for the three points.

"We had a disappointing result on Friday, despite a better second-half performance, it wasn't enough so we are looking to bounce back straight away at Dalymount if we can,” Tim Clancy said, speaking to the club’s media team.

“It's going to be another tough game in what is a busy period at the start of the season, but football always gives you an opportunity and with this match coming so quickly after Friday, it gives us a chance to bounce back.

“We loved playing in front of a packed Richmond Park on Friday, we've also had fantastic away crowds at both Tallaght Stadium and Tolka Park in the last couple of weeks and we'll hopefully have the same tomorrow night.”

In team news, Paddy Barrett is still absent due to injury, with the defender continuing his rehab while Ronan Coughlan may be fit enough to return to the starting lineup.

St Patrick’s Athletic could go top of the table with a win on Monday night.

The Saints suffered defeat on their last trip to Dalymount Park with Keith Long’s side running out 3-2 winners last July.

Monday’s fixture will be the first time the side meet since the Saints emerged victorious over the Gypsies in the FAI Cup Final last November, winning on penalties.