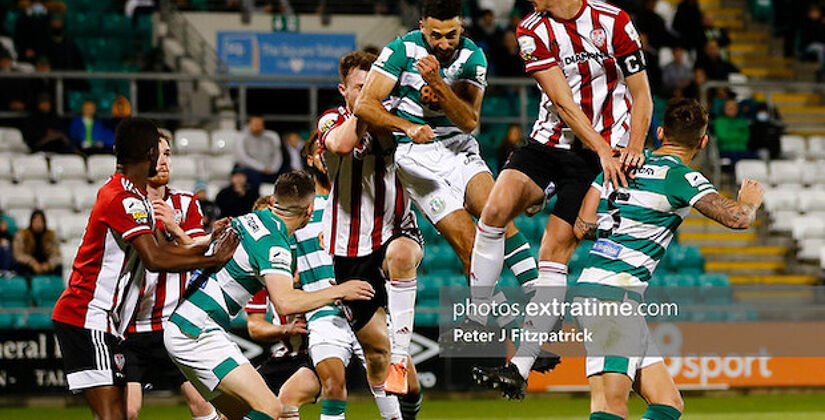 If all eyes – and the live TV cameras - were on sold out Tolka Park last week for Damien Duff’s managerial debut, this week the narrative is all about the two favourites for the title facing off against one another in a sold out Ryan McBride Brandywell Stadium.

RTÉ will show the game live as Derry City welcome the champions Shamrock Rovers to the Bogside.

With Ruaidhrí Higgins bolstering his squad in the off season with some eye catching signings – Patrick McEleney, Michael Duffy, Cameron Dummigan and Matty Smith - and Philip O’Doherty’s cash investment enabling some four year contracts to be handed out, talk of a title tilt in Derry makes a lot of sense.

The Candystripes battled back twice to get a point against Dundalk on the opening night of the season at Oriel Park. Having fallen 1-0 down, Joe Thomson’s goal levelled things up at half time and they needed a Jamie McGonigle goal ten minutes from time to equalise.

"It's a tough game of course and obviously we'll respect Shamrock Rovers,” said City assistant manager Alan Reynolds. "Like any team coming here though we have to be positive and try to win. It's the same with this match as well.

"It's been clear how much it means to people and that is really adding to the atmosphere,” said Reynolds speaking about the sold out clash against the champions.

“It's similar to the last time I was here when Stephen (Kenny) came back from Dunfermline. That support will really lift the players now too.

"We'll stay focused however. There are a lot of good teams in the league and every point needs to be earned."

The Hoops had two eventful trips to the Brandywell last season. Rovers won the first encounter 2-0 with Graham Burke scoring from the half way line. In the second game, the Hoops had their underage team travel to Derry as backup due a COVID-19 scare in the first team squad. It did disrupt Rovers in the first half and they went 2-0 down but came back to win 4-2.

Rovers had a fairly straightforward start to their title defence last week when they won 3-0 at home to UCD. Hoops Head Coach Stephen Bradley said that “for a large part of the game, I felt we were good and I felt that we were definitely a level of up from the week before (in the President’s Cup). We know it's only early, but definitely an improvement.”

Jack Byrne provided the assists for the first two goals with Sean Hoare heading home from a corner and Danny Mandroiu getting the second with a diving header.

“We know that the delivery is always there with Dylan (Watts) and Jack (Byrne), so it's just about making sure that our timing is good, and on Friday it was. Sean’s was from a set play and Danny’s from open play, but it’s in the delivery through a set-play, so good timing and happy that we scored the two headers.”

Graham Burke came off the bench to score Rovers’ late goal – six minutes from time. “It was great to see Graham back on the pitch,” said Bradley.

“He’s a little bit behind the rest of the group, in terms of preseason. We just have to ease him in, but we all know Graham’s quality, and we know what he brings to the team, he’s important in front of the goal, and he’ll be important for us this season, we just have to be careful with how we bring him back in over the next few weeks.

“We know it will be a difficult game, they have good players, there’ll be a full house, it’s their first home game and they have really high expectations this year, but we’ll go up and enjoy playing there.”

It is five years since Derry City last beat Shamrock Rovers – that was a 2-0 win in the Tallaght Stadium in August 2017.