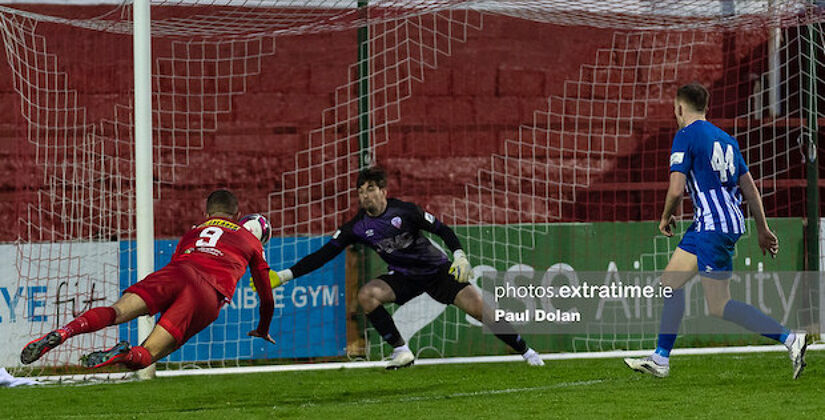 The Reds can wrap up the First Division title and secure a return to the top flight at the first time of asking if they defeat Treaty United at Tolka Park on Friday evening (kick off 7.45pm)

A superb start to the season saw the Reds go undefeated in their opening 16 league games, winning 12 and drawing four.

Their first defeat of the season against UCD in the FAI Cup was followed up by a run of four games without a win in the league, including a defeat to Galway United. That saw their lead at the top reduced to seven points but three wins on the trot have restored Shels’ ten point lead at the summit and leave them on the brink of winning the title with three games to spare.

Despite Shels’ impressive journey to this point, manager Ian Morris is taking nothing for granted against a resilient Treaty side.

“The lads know how big a game it is and that we have had two seriously tough battles against Treaty already,” said Morris. “We’re in for a really difficult game but we’ve been keeping clean sheets and scoring at the top end of the pitch which is firing so we’re in a good place.

“We’ll need to be tough at times tomorrow, we’ll need calmness and have the ability to finish at the top end. It’s set there for someone to be a hero.”

Morris also highlighted the role that the returning Tolka Park crowd will have in spurring on their team.

“I’m sure every single Shels fan wants to be there tomorrow and we’ll need their noise – even before kick-off.”

Shels won’t be the only side with something at stake on Friday evening as a win for Treaty would ensure their place in the First Division play-offs in their first ever season in the league.

The Limerick side have sat comfortably in the play-off positions for most of the league campaign and much of their success has come from their solidity at the back with Treaty boasting the league’s third best defensive record, behind only Shels and Galway United.

Treaty will be quietly confident that they can spoil the Shels party as they come into the match unbeaten in their last four, including a draw away to Galway with ten men on the field.

Both previous meetings of the sides have ended in draws.

Treaty have twice produced late equalisers to deny Shels with William Armshaw scoring in the 94th minute in July to secure a 1-1 draw in Limerick and Clyde O’Connell in the 97th minute at Tolka Park to make sure the game ended 2-2 in an epic encounter in April.

Shels went unbeaten in the first 18 games of their league campaign while Treaty were undefeated in their opening six.