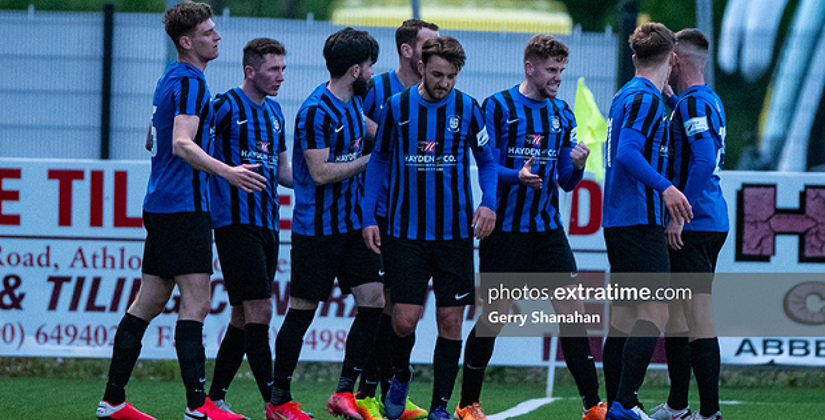 Athlone Town will be looking to take hold of second place in the First Division table when they host UCD on Friday night (kick-off 7.45pm).

Last week Adrian Carberry’s men showed tremendous fight back when they came from behind to beat Cobh Ramblers 2-1 at Athlone Town Stadium.

Ramblers’ Killian Cooper opened the scoring in the 15th minute and it took until the 70th minute for Athlone to find their breakthrough when Derek Daly netted for the home side.

It looked like Athlone might just have to settle for the point until James Doona put his side in front in the 82nd minute to give the Town the three points on the night.

The result must have come as a relief to the Athlone Town faithful, with that victory coming after three straight losses.

After a really bright start to their First Division campaign, their games against Shelbourne, Treaty United and Cabinteely in recent weeks all ended in defeat.

Carberry’s side will be looking for a second win in a row on Friday which would put them firmly into second place in the League and could see them gain ground on first place Shelbourne.

Having faced all nine of the other teams in the First Division this season, Andy Myler’s UCD find themselves just five points behind Shelbourne in second place.

The Students had gone unbeaten this season right up until last week’s meeting with the Reds when they lost 3-1.

Two quick fire goals from Shelbourne in the first half from John Ross Wilson and Ryan Brennan put Shels into a commanding lead by the 25th minute.

Harvey O’Brien pulled a goal back for the Students in the 41st minute only for Brennan to score his side’s third goal just before halftime to clinch the three points.

Athlone Town will be another tough test for Myler’s side but a win could be extremely important for UCD, and it would move them out into second place by themselves early in the second series of games.

“Next Friday is the last game before the break, for two weeks. I’m happy enough with how it’s gone,” Myler said, speaking to extratime.com after last weekend’s loss.

“We’ll get back on the horse again for next week.

“We’ve a really hard game in Athlone next week but we’ll look forward to it and we’ll go and try and play again against a good footballing side in Athlone.”

UCD’s Colm Whelan is the leading goal scorer in the First Division with eight goals to his name so far this season.

The Town put and end to a three game losing streak when they beat Cobh Ramblers 2-1 last weekend.

Athlone Town haven’t beaten UCD in the First Division since March 2015 when they ran out 2-1 winners at the UCD Bowl.