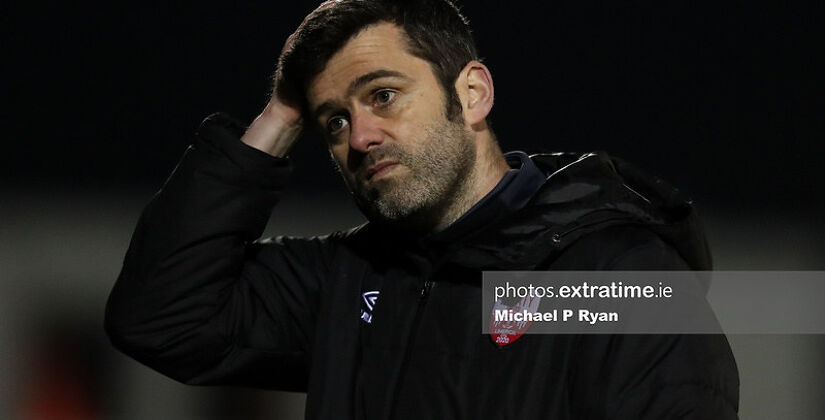 It’s still early days, but Treaty United will be satisfied with their start to the new season.

The Limerick-based outfit have returned four points from a possible six so far and are currently in fourth place in the table.

Last Friday was a momentous night as they got their inaugural victory in the competition beating Wexford 1-0 with Anthony O’Donnell scoring their first ever goal.

Despite an impressive showing, Treaty manager Tommy Barrett is taking nothing for granted and remains fully focused on the task at hand.

Barrett is expecting a “tough game” tomorrow night against Cobh Ramblers, describing them as a “high-energy side” who “play good football”.

Despite a bad start for their opponents, Barrett still thinks the Cork side can reach the play-offs at the end of the season.

Cobh Ramblers are still looking to get off the mark this season having tasted defeat in each of their opening two fixtures.

The Rams kicked off their season with a 2-1 loss to Cork City in the Leeside derby before going down 4-0 away to UCD last week.

Ahead of Friday night’s game, Cobh manager Stuart Ashton is clearly eager to put last week’s defeat behind them.

“We’ve moved on from last week. The lads know that it wasn’t acceptable. We can play the blame game but as a collective we were second best on the day and we all know where we stand.

We have to get back on track, hopefully with an away win at Treaty. They’re a good side and they’ve started brightly. We have to be wary and we’ll have to play to our best.

We’ve got to show the real Cobh Ramblers and then we’ve got a chance. There’s no easy games in this league, we have to be up for it and show that last week’s performance was a once off.”

Treaty United boast the best defensive record in the First Division and are yet to concede a single goal this season.

Goalkeepers Tadhg Ryan and Shane Cusack have both kept a clean sheet in each of Treaty’s opening games matching the achievement of both Cabinteely and Cobh Ramblers last season.

Incidentally, Sean Barron who kept a clean sheet for Cobh last season and Corey Chambers who did the same for the Dubliners, are now both in the Rams squad for the current campaign, although Chambers is ruled out of Friday’s game through injury.

Cobh Ramblers are bottom of the First Division following the opening two rounds of fixtures and are still looking for their first points of the season. Wexford are in the same boat, but the Cork side are in last place on goal difference.

Michael Cooke has yet to write anything about themselves but click on the bio link to view all past work.