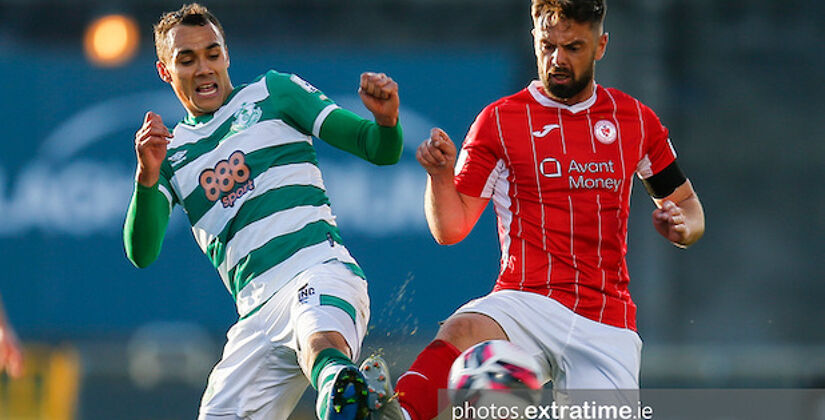 Ahead of next week’s Europa Conference League qualifier against KF Teuta Durres, the Hoops have a tasty top of the table clash against St. Patrick’s Athletic (kick off 8pm). Rovers lead the league due to a two goal better goal difference from the Saints who have played an additional game.

“Pat's have had a good season so far,” was the assessment of Hoops Head Coach Stephen Bradley speaking to his club’s media team. “They're up and around the top and have been from the start so we know they're a good side. We know what they'll bring to Tallaght. We've got to be ready for that and I'm sure we will.

"Dublin Derbies always make the games tight and competitive games. That's been the case the last few years and I don't see Friday being any different."

Bradley’s team come into the game with three wins in a row with a 2-1 win over Slovan Bratislava in the Champions League qualifiers (which saw them lose the tie 4-3 on aggregate), an incredible 4-2 comeback league win over Derry City and a 2-0 win over Galway United in the cup last time out.

"I thought first half we were very good,” said Bradley about the FAI Cup win over Galway United which has set up a second round tie away to Bohemians. “Every part of our game was good and of high quality and we obviously got the two goals as well which was pleasing.

"We put together some really good moves in the first half and the two goals sort of summed that up. There was some really good play, good energy and tempo and it's always nice when you finish the moves off for a goal.

“To be fair to Galway, they were very good in the second half and came close on a couple of occasions. Our aim, to get into the next round. We did that and the most pleasing aspect was that we got the two goals and the clean sheet."

The capacity for Friday’s game has been set at 1,500 spectators.

The Saints can certainly think themselves unlucky not to have taken any points from the two games played against the Hoops this season. They led late on in the first game of the season before conceding a last minute equaliser to Rovers and it was an even later goal in the game in Inchicore that cost them dearly when Danny Mandroiu got the winner for the Hoops in the 92nd minute for a 2-1 victory.

The Athletic kept Rovers scoreless in both league games last season, and coupled with their excellent performances against the Hoops and elsewhere so far the season, this is as good a game as any for them to get their first league win in Tallaght Stadium for five seasons.

Last time out St. Pat’s cruised by Bray Wanderers 6-0 in the FAI Cup at Richmond Park which came on the back of a 2-0 home win over Drogheda United. Saints Head Coach Stephen Bradley is looking forward to the task that awaits them in Tallaght Stadium on Friday and is very pleased with where his side is at this stage of the season.

"We're going to Tallaght which is a great place to play, it's lovely surface and a great arena so it's a match we are really looking forward to, it's a really good game to play. We are 21 games in, and in a good position in the league and probably nobody expected us to be there apart from ourselves internally, we knew what we were capable of in the group, but the lads are exceeding expectations and the way they are working week on week is great.

“We are just going like we are every other week to try and put on a performance in the sense of application, intensity and honesty and see where that takes us. That's what the players have done throughout the season and they have been brilliant in that regard.

“Week in, week out, they are really working hard during the week in preparation for the matches. It's a game we are really looking forward to so in regard to pressure, there's no real pressure on us.”

Paddy Barrett is also looking forward to what he is calling a “massive” game. “It's obviously going to be a different test to previous weeks because obviously we've been at home and I think we have been comfortable at home the past few weeks, but going away to the league champions, we know it's going to be a difficult game but it's one that we are going to prepare for this week and it's one we are really excited for.

“We know what we are up against, we know how good Shamrock Rovers are but we are more than capable of going down there and if we put in the performances that we have been doing, I'm fully sure that we can go down there and get the win we need."

MATCH STATS
May 2018 is the last time St. Pat’s beat Rovers and the Athletic haven’t beaten the Hoops in Tallaght since 18 March 2016 – a 2-0 win for the Saints secured thanks to goals from Billy Dennehy and Christy Fagan.

Graham Burke is top scorer in the league for Rovers with eight goals (plus one in Europe).