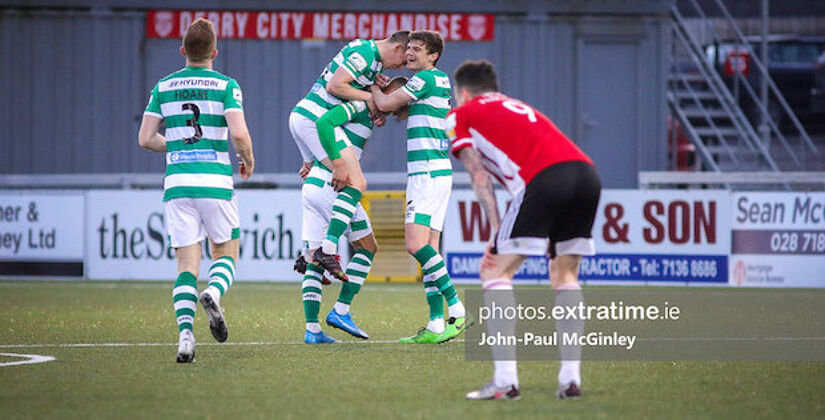 The Candystripes welcome Shamrock Rovers to the Ryan McBride Brandywell Stadium in Derry on Friday evening (kick off 7.45pm).

City boss Ruaidhri Higgins was full of praise for the Hoops who beat Slovan Bratislava 2-1 on Tuesday night (losing 3-2 on aggregate) when he may have preferred if Rovers had been required to play an additional 30 minutes of extra-time even with their strong squad.

"They had a brilliant win against Bratislava in midweek and were unlucky not to take the tie to extra-time. The quality they had on the bench let alone the pitch means they can make changes and it doesn't affect their team at all."

His own team have just the one win in their last four games, losing 1-0 last Friday night against St. Patrick’s Athletic in Richmond Park.

“I'm obviously disappointed with our loss against St Pats but overall we've been playing well.

"We're actually looking forward to the game and we will look to be positive from the start. Apart from Marc Walsh we have a full squad to choose from so we have options.

"It's great that the supporters are starting to return as well and I have no doubt they'll be right behind us."

The Hoops sit top of the table on goal difference ahead of Sligo Rovers and St. Patrick’s Athletic (who have played a game more than both the Hoops and the Bit O’Red) and they come in to the game with lots of positives from their performance in Europe during the week despite their exit from the Champions League.

“You're playing against a top team, and we knew that we had to be right on our game to turn it around,” said Stephen Bradley about the Champions League win against Slovan Bratislava in the second leg which ultimately saw them eliminated 3-2 on aggregate.

“The players were excellent and each and every one of them performed and stood up to it.  They're a top team and that's credit to the players for doing that over the 90 minutes. We'll learn from the two games, make sure we improve and make sure we're stronger for it going forward."

“I felt the players' performance deserved more. They deserved to go through, but it wasn't to be. But we'll learn from it and move on."

For much of the season, the Hoops have seemed to be just off top gear and Shamrock Rovers supporters will be hoping that the excellent win and performance against Slovan is a sign of where there team is at now.

“Derry is going to be a really difficult game, we know that, but this group is hungry for more nights like Tuesday night and that starts with Derry on Friday - going up there and getting three points," said the Hoops Head Coach.

“We enjoy it, it's a big pitch. We're comfortable on it because we're lucky enough to have a surface very similar in Roadstone which allows us to prepare right for it. We enjoy going up there, but Derry have been very good recently and it won't be an easy going at all. We need to be ready for that."

It is four years since Derry City last beat Shamrock Rovers – that was a 2-0 win in Tallaght Stadium in August 2017 with goals from Aaron McEneff and Barry McNamee.

Coming into the last game between the sides, the Hoops had won seven in a row but the 1-1 draw in Tallaght Stadium in April was the start of a run of what are deemed dissappointing results for Rovers. In the next nine matches including that one, Stephen Bradley’s side have won three, lost two and drawn three.