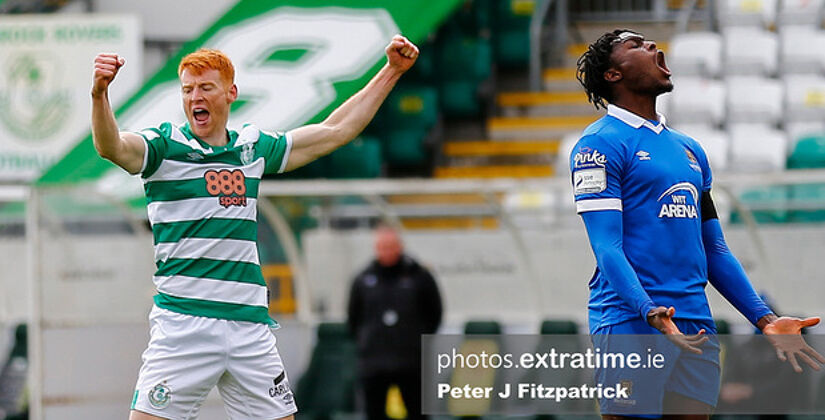 Waterford won last time out with a 3-1 away victory over FAI Cup holders Dundalk as Marc Bircham earned his first victory as the Blues boss. That result stopped the rot of seven consecutive defeats for Waterford.

John Martin grabbed a brace of goals with Shane Griffin adding the third as they came from behind to claim all three points against the Lilywhites.

“We’re happy with the result last Friday after a good performance,” said Bircham speaking to his club’s media team. “We’ve been working hard on the training ground and we can see improvements already. We’ve still got lots of work to do so I won’t get too excited when we win or when we lose at the moment.”

The Blues are seeking just their second home win of the season, having beaten Longford Town 1-0 back in April thanks to a goal from Prince Mutswunguma and Waterford will travel to take on Longford next Monday night.

On the back of last week’s win over Dundalk and Rovers’ current dip in form, this is probably as good a time as any for Waterford to take on the 2020 League of Ireland champions, especially as this Friday’s game will be the first match with a limited number of fans in the RSC this season.

“Friday will be a massive test for us but it’s an exciting challenge, said Bircham. “Shamrock Rovers are at the top at the moment so nobody will expect much from us, but we’ll prepare in the same way and look to the game in a positive manner.

“It's a busy weekend with games on Friday and Monday but we’re looking forward to it. We’ll focus on Friday and then look to Monday’s game to get positive performances in both.

“Having our fans back in the ground too will be brilliant for our lads. I’ve heard so much about the passionate fans in Waterford so having them in the ground will be great and hopefully we’ll have even more back soon when more restrictions are eased.”

When the Hoops last played Waterford on the Monday of the May Bank Holiday weekend, Rovers’ 3-0 win broke the all-time League of Ireland unbeaten record of 30 matches. Since then though, the Hoops have lost twice, drawn twice and won twice.

A crisis for the Champions? Maybe not, as Rovers are still leading the league; having drawn last Friday night at home to Finn Harps, a defeat for Sligo Rovers on Saturday night sent the Hoops back on top of the table on goals scored.

"We're really happy,” said Hoops Head Coach Stephen Bradley speaking about Rovers’ position as league leaders 15 games in this 36 match season. “You have to look at the last month where we've been down a lot of bodies, and we've played some difficult games in that period. We're really happy with the players and where we are. We know we can get better but it's a good return. We're top of the league and it's time now to push on and build on that."

Bradley has a few more options this week to call from as Pico Lopes has returned from international duty with Cape Verde and both Sean Kavanagh and Ronan Finn have been training this week.

The Hoops took a nine minute lead through Aaron Greene against Finn Harps last Friday in front of 1,000 spectators as part of the government return of spectators test event but conceded an early second half goal and couldn’t break down a resolute Harps defence in the remainder of the match.

“We started the game really well. We played well and possibly should have had a couple more in the first half. It was a really poor goal from our point of view [to concede] but it was coming from them. We started the second half really poorly and allowed Finn Harps back into the game which we should never have done. But we did and we got punished so it's something that we have to learn from.

“We just couldn't finish the opportunities that we created. Sometimes that happens. I think the players in the first half and the last 30 minutes of the game were very good and created chances. We just didn't take one of them."

“It was brilliant,” said Bradley about the return of spectators to Tallaght Stadium. “I think you could see that it had an effect on the players in terms of the energy that was brought to the game. The atmosphere, although it was only a 1.000 fans but it genuinely felt like a lot more. It was unbelievable to have them back and I was delighted to see them there."

MATCH STATS
The teams have played 11 times since the return of the Blues to the top flight in 2018. Waterford won the first match and that was their last victory earned over the Hoops. There was a draw and two wins in the other encounters that year. Rovers won all four ties in 2019 and both matches in 2020 – 2-0 in the RSC and 6-1 in Tallaght Stadium.

Rory Gaffney, Gary O’Neill and Danny Mandroiu were the goalscorers for Rovers in their 3-0 win over Waterford in Tallaght Stadium when the teams last met.

Waterford’s last league win over Rovers came thanks to two Courtney Duffus goals either side of a Graham Burke strike in the RSC on 23 March 2018.