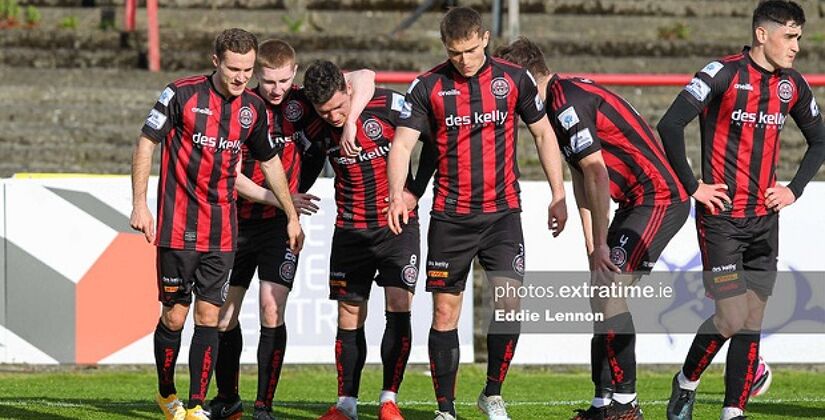 Bohemians will be looking to get back to winning ways on Monday evening as they welcome Dundalk to Dalymount Park (kick-off is at 5.45pm).

The Gypsies fell to a late, late defeat in their last league outing at Richmond Park against St Patrick’s Athletic.

Keith Long’s side looked to have secured a point at the death thanks to a Dawson Devoy spot-kick.

However, the Saints would score with a penalty of their own minutes later – with Robbie Benson stroking the ball home into the back of the net.

The result came as a blow to Bohs who had only got their season up and running with two consecutive wins for the first time this season.

Ahead of the visit of Dundalk to Dalymount, Bohs are in 6th, ahead of the Lilywhites on goal difference.

In terms of team news, Stephen Mallon is the only known absentee thus far for Monday’s game.

Buoyed from their last win over Shamrock Rovers, Dundalk visit Dalymount Park looking for their fourth league win of the season.

Daniel Kelly’s winner brought an end to the Hoops’ 33-game unbeaten run – and their interim boss Jim Magilton wants his side to push on as they get set to take on Bohs on Monday evening.

“The lads were magnificent to a man against Shamrock Rovers on Friday night,” he told his club’s media team.

“Their work rate, grit, determination – all the dirty words that help win a game of football against a top-class side – were evident.

“We can’t rest on our laurels. The lads know that this could be a start but if we don’t go and present ourselves on Monday then the win over Rovers was a waste.

“We’ve set standards, so we have to maintain them now.”

Since their 2-0 defeat at home to Finn Harps in October 2020, Bohemians have only won once at home since then – and that was a 4-0 win over Harps in their last outing at Dalymount.

Dundalk have lost their last two league games at Dalymount Park – although they did come out on top in the last meeting between the pair in Phibsborough in the FAI Cup.

The Lilywhites have only recorded one clean sheet on their travels so far this season – and that proved to be their only league win on the road thus far, against Waterford.