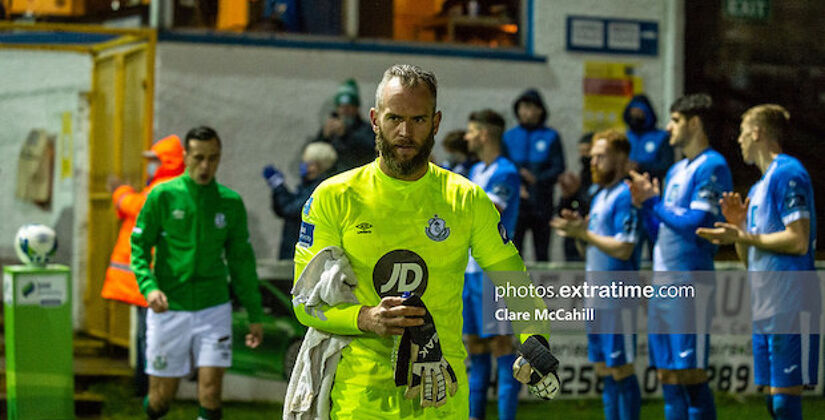 In early November last year when Harps last welcomed Shamrock Rovers to Finn Park in league action they formed a guard of honour to welcome the newly crowned champions onto the pitch ahead of Rovers’ 2-0 win.

When the sides met later that month, the welcome wasn’t as friendly with Harps feeling hard done by in losing the FAI Cup quarter-final having led the Hoops 2-0 at half-time.

Referee Rob Hennessy incredibly awarded Rovers three penalties in four minutes in the second half. Aaron McEneff converted two of them before Graham Burke got the winner. Hennessy is in charge of this Friday’s game.

Ollie Horgan’s side finished the season strongly to maintain the Premier Division status and carried momentum into the new campaign. However, recent results have seen them drop off the top of the early season table – they have earned just the one point from the last nine available.

They lost their first home game of the season last Friday – a 2-0 defeat to league leaders St. Patrick’s Athletic.

“We’re going into a game with the best team in the country now on Friday and so we’re quite realistic about what’s in front of us,” said Ollie Horgan speaking to his club’s media team. “If we’re not right, we could be in for a long night of it.

“We would love to close the gap again tomorrow night, but we need a decision to go for us rather than three penalties given against us like last time.”

Harps’ 2-0 win late last season in Dalymount Park handed the league title to the Hoops. Speaking ahead of Friday’s game against the champions, Mark Anthony McGinley said: “Rovers were the best team in the league last season and I know they’ve lost Jack Byrne and [Aaron] McEneff but they’ve brought in a lot of quality.

“It’s not going to be easy and if we’re not at it it’ll be another disappointing night, but that’s up to us to make sure that the disappointment we felt after last Friday is put right now and we go out and put a good performance in.

"We know this season that if we play to the level we can, we’ll push any team to get a result. But if we’re not at that level, they definitely have the quality to punish us.”

The Hoops travel to Ballybofey seeking to equal the all-time league record of 30 matches without defeat. It is 13 years since they last lost against Harps but were given an almighty scare last season when they trailed Ollie Horgan’s side 2-0 at half-time in the cup only to dig out a 3-2 win on a treacherous night weather wise in the north west.

“Last year when we were two down we were deservedly two down at half-time,” said Hoops Head Coach Stephen Bradley reflecting on that game in Donegal.“We got ourselves back in the second half but it showed how dangerous they are and I think they’ve shown that on a number of occasions. If we’re not at our levels we know that Harps will punish us.

“This will be a really difficult game. They’ve started really well and picked up a lot of good points and they’ve been really good.“

The Hoops come into this game on the back of five straight wins over Bohemians (coming after a run of seven defeats and one draw in the previous Dublin derbies. Graham Burke scored the winner from the penalty spot in the 76th minute – his third goal of the season.

“It was a tough game obviously. Derbies are always tough but we were delighted to come out on top and get the win. I think our play in the first half deserved more than the one goal [scored by Dylan Watts]. I thought we created some really good opportunities and played well attacking wise. We were rewarded with Dylan’s goal and the first half was good.”

Bohemians weren’t happy with the awarding of the penalty and the subsequent red card for James Finnerty but Bradley believed it was a penalty. “I thought that at the time and I watched it back and felt that as well. The defender gets caught on the wrong side [of Danny Mandroiu] and it’s a penalty.

“We’ve had players sent off for the ball hitting them in the face in those games. We’ve had Aaron Greene sent off for a non-tackle. We’ve had a lot of big decisions go against us in those type of games but let’s be honest, that wasn’t the wrong call [on Friday].

"It’s a penalty. It’s nice to win any game but when you beat your rivals, it’s even nicer for the fans and the club. So it was good to keep that run going.”

Bradley was speaking to the Hoops media team on the eve of the game but the club are joining the European Club Association (ECA) social media boycott from 15:00 on Friday through to midnight on Monday night.

This is in support of the ECA’s campaign against the ongoing and sustained discriminatory abuse received online by players and many others connected to football. The club noted ‘we will not publish any content across our social media channels during this weekend, to stand in solidarity with this cause.’

Harps have lost 12 straight league and cup games against the Hoops.

Their last draw against Rovers was five years ago – a 1-1 result in Tallaght in March 2016 and their last victory over the Hoops was in November 2008.

There are four former Hoops in the Harps squad this season – Dave Webster, Sean Boyd, Ethan Boyle and Ryan Connolly.