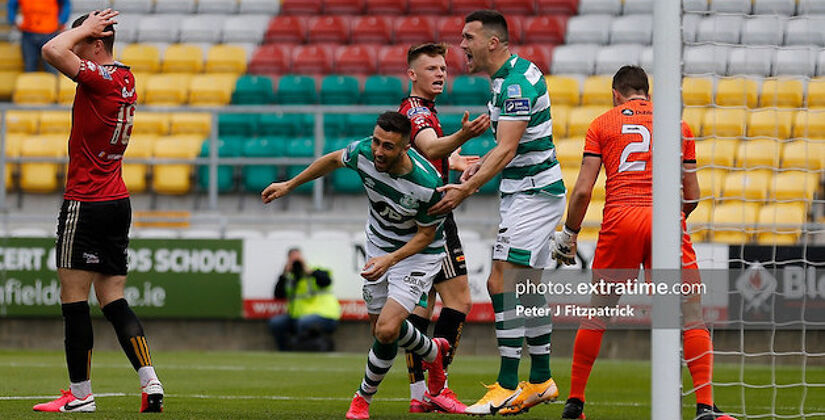 The Hoops have had a habit this season of scoring crucial late goals – in four of their six league matches they have scored in the 87th minute or later to pick up points and none later than last Tuesday night in Drogheda.

Danny Mandroiu’s header off a Dylan Watts free kick in the fifth minute of stoppage time gave the Hoops a 1-0 win and meant Rovers retained their position at the top of the table level on points with Sligo Rovers and St. Patrick’s Athletic.

"Obviously we were delighted to get the goal and the win,” said Hoops Head Coach Stephen Bradley about the late winner when speaking to his club’s media team ahead of Friday’s Dublin Derby against Bohemians (kick off 7.45pm).

“Again it just shows the mentality in the group, the way they never stop believing which is really important. We know Dylan's delivery is always on point. It's about making sure that the runners and the players in the box find their lanes and make sure they hit them. The delivery is always there.

"They believe in what we do and they don't stop believing until the final whistle is blown. They keep probing and keep looking for the opening and it takes a lot of courage and bravery to do that because you can get sucked into just kicking it long when it comes to the latter stages of the game. But the players don't, they keep probing and they get their rewards."

Last Tuesday’s game in Drogheda saw Rovers stretch their unbeaten run in the league to 28 games, eclipsing the Premier Division record of 27 from 2009 that was held by Bohemians. In going unbeaten so far this season the Hoops have 14 points from the 18 on offer.

The visitors lost their last game out – a 3-1 home defeat to Sligo Rovers.

"I only watched their game against Sligo and it was a pretty even game,” said Bradley. “Both teams had chances and there wasn't much in the game. It was a really competitive game and of course we expect the same on Friday.

Bohs finished 11 points behind the Hoops in last season’s 18 game league campaign and so very much rued the two 1-0 defeats that they suffered in the Dublin Derby matches against Rovers.

Aaron Greene scored a 93rd minute winner in Dalymount Park in February 2020 in what was the opening league fixture for the sides last year.

Keith Long’s men won seven of the next eight league games and came to Tallaght  Stadium in early September knowing a win would send them top of the table.

Rather than a late goal, it was an early one that won the game for Rovers thanks to Danny Lafferty’s third minute strike.

With that loss and the Hoops having a couple of games in hand, the Gypsies never could put real pressure on Rovers in the shortened COVID-19 hit league campaign and when Finn Harps won in Dalymount Park 2-0 in late October, that result handed the Hoops the league title.

It has been a slow enough start to the season for the Gypsies whose only wins have come away from home beating Dundalk in Oriel Park and winning 1-0 in Waterford.

They won’t want to fall any further behind the Hoops if Bohs are to go one better than last season and win their first league title since 2009. If they can get a victory, it would send them above Drogheda United and into fifth place.

The Hoops have won the last four matches between the sides (three in the league and one in the FAI Cup) but were eight games without a win (seven defeats and one 0-0 draw) before that.

Graham Burke and Danny Mandroiu are top scorers for the Hoops with two goals each.

The teams have played each other 235 times in league action with Rovers winning 104 to Bohs’ 69.