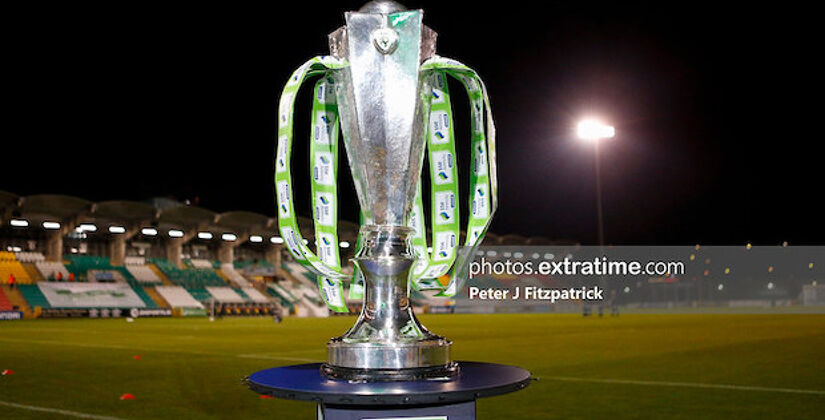 The Hoops begin the defence of their title in Tallaght on Friday against St. Patrick’s Athletic (kick off 7.45pm) – the only team they failed to get a league win against in 2020.

When the teams last met in November, they played out their second scoreless draw of last season, on the night that the Hoops were handed the league trophy.

“I think you can read too much into that,” said Hoops Head Coach Stephen Bradley about last year’s results against the Saints.

“What we have to look at is that this year they’re going to be a good side and now they’ve strengthened so you’d expect them to be even better. It’s going to be a tough game and we have to be ready for that.”

Last week the Hoops played out a 1-1 draw over 90 minutes against Dundalk with the Lilywhites earning the right to lift the President’s Cup in Tallaght by winning the penalty shootout.

The Hoops conceded from a corner before Liam Scales lit up Tallaght Stadium with a superb strike.

“It was a really poor goal to give away from our point of view. It was a basic enough set play and we should have dealt with it after that but didn’t.

“I thought Liam was very good. Left wing back is not his number one position but he’s played anywhere on the left side throughout his career and I think that showed with how comfortable he was. He was exceptional.

"His goal was fantastic ability; two touches, one with his right foot and then the finish with his left. It was top class all around.”

“Everyone has worked really hard for quite a long time now for this moment, to get back playing. So we’re really excited. It’s always nice to start the campaign with a win and obviously that will be our aim again this year but we understand that we’re against a good side and we’ve got to respect that.”

Having kept Rovers scoreless twice last season, the Saints are seeking to go one better on the first day of the new season by inflicting the first home league defeat on the Hoops for twenty months.

It is now five years since St. Pat’s have beaten Rovers in league action at Tallaght Stadium but Pat’s are relishing the challenge of kicking off the season in a Dublin derby against the 2020 Champions.

"It's two of the biggest clubs in the country and Dublin derbies are special,” said Saints Head Coach Stephen O’Donnell ahead of Friday’s game.

“It's one we are looking forward to and it adds a little bit of spice because it's the first game of the season, everyone is raring to go!"

O'Donnell has brought in nine new players into his squad with 11 leaving Inchicore and the Saints gaffer notes that “I think we have a really good mix.

"We have good experienced players who are good characters and then we have our new signings and some excellent young players who have come through our academy that are giving that little bit of youth to it and keeping the more experienced ones on their toes."

One of those new players who brings experience to Inchicore is Paddy Barrett who has played with Dundalk, Waterford and Galway United and has just returned from a brief spell playing in Cambodia.

"It's an opportunity that we must take in our stride and be grateful that we can go out and perform on live TV to our fans, friends and families,” said Barrett.

“It's going to be an unbelievable occasion. It's the first game of the season and a one that we are really excited about and hopefully we can put a performance.

“For me personally, I want to go out and play every week and hopefully improve this team and push them as high up the table as we can, it's going to be a long ride, and one that we are willing to tackle."

MATCH STATS
Rovers have conceded just the one goal in their last 11 league matches. They are unbeaten in the league since September 2019. Since then they have avoided defeat in 22 consecutive Premier Division games (18 wins and four draws).

Rovers haven’t lost a league game in Tallaght to the Saints since 18 March 2016 – a 2-0 win for the Saints secured thanks to goals from Billy Dennehy and Christy Fagan.

Aaron McEneff: 'It was time to move away, try to kick on and find that new challenge' https://t.co/J9NT9wGXcD pic.twitter.com/1Bxjkidsgo