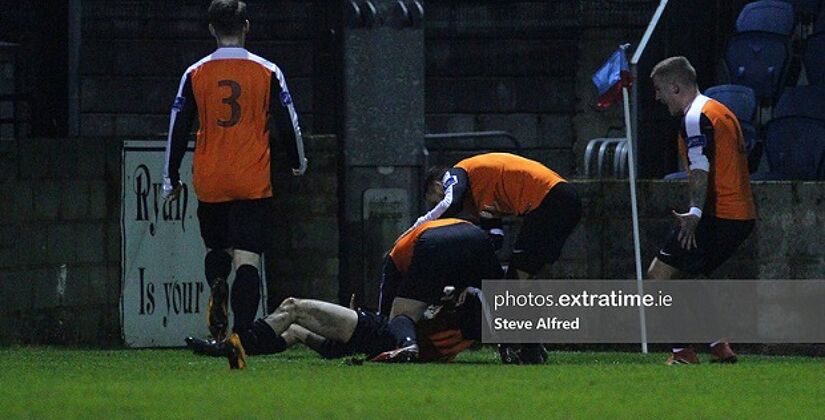 A youthful St Patrick’s Athletic are expected to line out at Richmond Park on Saturday afternoon in the long-awaited final of the Leinster Senior Cup (kick-off is at 3pm).

The Saints saw off Sheriff YC in the last round of the competition, as extra-time goals from substitutes Kyle Robinson and Kian Corbally saw off the junior side.

Daniel Dobbins had given the Athletic the lead just past the hour, but Leon Hayes levelled the tie within two minutes, and Sheriff had the better chances to win inside 90 minutes.

Both sides tired in extra time and it was the fresh legs of Robinson and Corbally that proved the difference with strikes inside the final seven minutes of extra-time.

With Wednesday providing an opportunity for Stephen O’Donnell’s youngsters to pick up silverware before the off-season – keeper Brian Maher admits he is relishing a chance to lift the famous old cup.

“The season for me hasn’t ended because of the Leinster Senior Cup,” Maher told his club’s media team.

“You’re better off playing games because everyone knows how long the off-season is here so now, we have a final to look forward to.

“It’s a piece of silverware for the club, for pretty much a group of players from the academy.

“There was good numbers at the Sheriff game and it’s a home cup final whatever way you look at it.

“It’s a chance to see the players who are coming through. We’ve got one of the best academies here at the club and it’s a chance for the fans to see players who could play for the senior team in a few years and hopefully they’ll see the club win a trophy.

Athlone reached the decider in rather bizarre circumstances, with Bohemians opting out of the tournament before the semi-final stage.

In the last eight, the Blue and Black of the Midlands saw off Premier Division UCD by three goals to two, with Ciaran Grogan’s late winner proving decisive.

The Midlander’s league campaign finished on September 22, with Terry Butler’s side only playing one game since then.

Athlone have only won the competition on three occasions previously, winning in 1970, 1992 and 1999.

Should the Co. Westmeath outfit secure victory, it will be their first piece of silverware since 2013, when they secured the First Division title.

St Patrick’s Athletic are unbeaten in the Leinster Senior Cup since 2017, with their last defeat in the tournament coming at home to Shelbourne in 2017.

The Athletic were outwitted on penalties in last year’s decider, with Shels once again seeing off their Inchicore rivals.

Athlone’s last encounter against the Saints in the Leinster Senior Cup came all the way back in 2014, with a 3-2 defeat at home.