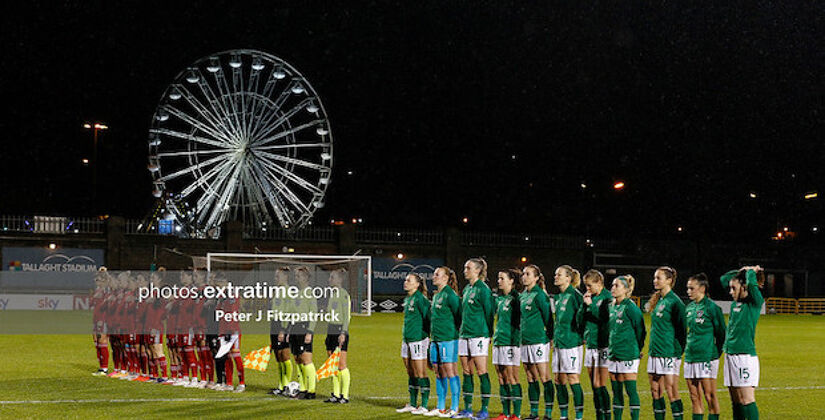 The home side are seeking their first points of the qualifying campaign when they host the  Republic of Ireland on Monday evening (kick off is 5pm Irish time – 8pm local).

The game is being played in the Tengiz Burjanadze Stadium in Gori just over an hour away from the Georgian capital of Tblisi.

When Georgia played their last qualifier they got tonked 15-0 by Sweden in Gori – which was the second highest ever win for the world number two side just behind a 17-0 win against Azerbaijan in 2010 (the only points dropped by Sweden in this campaign so far was Ireland’s 1-1 draw in Gothenburg in April).

Georgia have lost six out of six in the qualifiers, conceding 41 goals and they have yet to find the back of the net.

The game in Georgia is what Ireland hope will be a next stepping stone to the World Cup in Australia and New Zealand in 2023.

Win on Monday and back that up with victory at home against Finland on 1 September and a play-off will be secured irrespective of the result away to Slovakia on 6 September. They would then have to get through a complicated play-off to reach the tournament with 2.5 positions available still for sides from UEFA at next year’s world cup.

Vera Pauw has a full squad to choose from having had no new injuries during Ireland’s two week training camp in Turkey. She also confirmed on Sunday that goalkeeper Courtney Brosnan will start the game and - while they are taking on a team they beat 11-0 last time out in Tallaght – this will not be a game for experimentation.

Courtney Brosnan: ‘When everyone starts playing football they dream about being able to play in a World Cup’ https://t.co/CsqsJE23Dt pic.twitter.com/zrZaF9zxoo

"We feel that we are ready for this game against Georgia,” said the Dutch coach. “It is a very important game for us with the three points being our target. We know what we have to do and we will have a game-plan that will take everything into account.

"People should not expect the same situation from when we played Georgia last year because they were missing some players and they are also playing at home in this game. But we are ready; we have trained hard, prepared well and we will go out to win the game."

Diane Caldwell, who missed the draw in Gothenburg, played 90 minutes in Ireland’s 1-0 friendly win over the Philippines last week and the 33-year-old Manchester United player very much has the target of getting to the World Cup in her mind.

“You have goals and targets and everyone has the goal of getting to a major tournament but with the collection of players we have now it is the best we have ever had. Those targets become a bit more attainable.

“The possibility to still qualify is there and it is these next three games that will determine if we get to that play-off spot.”

Ireland are ranked 27th in the world rankings – equalling their highest ever position for the women’s side which was back in 2008 (when they reached the play-off for the European Championship – losing to Iceland).

This match is Vera Pauw's 22th in charge of Ireland and she has 9 wins along with 3 draws. Her team have scored 33 times and conceded 25.

Skipper Katie McCabe and Denise O'Sullivan are top scorers for Ireland in this campaign with four goals each.