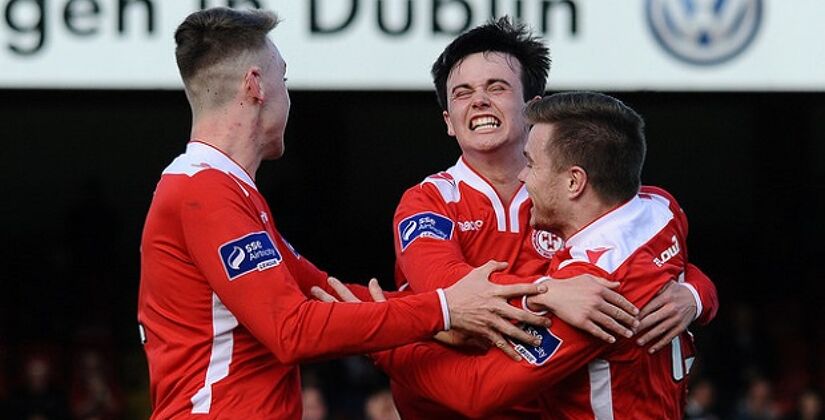 Cabinteely will host their near neighbours Shelbourne in what promises to be an enthralling encounter at Stradbrook on Saturday afternoon (kick-off 3pm).

Cabinteely managed to stop the rot last weekend with a commendable 0-0 draw against UCD that put an end to their recent string of four consecutive league defeats while simultaneously putting a major dent in the Students prospects of keeping their promotion push moving along.

Manager Eddie Gormley was understandably pleased with his side’s performance and the result and will be hoping that they can build on that decent display and hamper Shelbourne’s attempts to gain promotion to the Premier Division.

Cabo will be aiming to reproduce a similar performance when the two sides clashed earlier in the season culminating in a 1-1 creditable draw at Tolka Park.

Boss Gormley has no serious injury concerns ahead of the match, with a fully fit squad to choose from apart from midfielder Lee Mitchell who picked up a knock midway through the second half in the game against UCD.

Shelbourne go into this tricky away fixture off the back of a league and cup double header last weekend. Shels recorded a morale boosting 2-1 win over Athlone Town at Tolka Park last Friday night with goals from Aidan Collins and James English. This was followed by a heroic display in the Quarter Finals of the EA Sports Cup against Shamrock Rovers on Monday with Rovers winning 3-2 on penalties after a 1-1 after extra-time.

Shels boss Kevin Doherty expressed his disappointment with his side being knocked-out but was upbeat about the result telling www.shelbournefc.ie, “Really disappointed to go out on penalties. I’m very proud of the lads, they were excellent. We made seven changes from the team that defeated Athlone on Friday night and I’m very happy with the lads that came in.”

Manager Doherty is not getting complacent and is expecting Cabinteely to offer stiff resistance saying to www.shelbournefc.ie, “It will be a tough one – they drew here with us in Tolka at the start of the season! We’ll prepare for it, get the lads back up for it after tonight (the Rovers game). They’re a bit deflated after losing on penalties, but we'll get going again and if we can produce the form we showed against Rovers, we should come away with something from Cabinteely.”

Doherty has a lengthy injury list to contend with and will have to make do without Gareth Coughlan, Cian Kavanagh, and Stephen Elliott, with doubts over the fitness of Adam O’Connor and Gavin Boyne. Aidan Collins and Conor Keeley are likely to be available despite both picking up knocks in the game against Rovers. Sodiq Ogundola who got injured in the warm up on Friday night and Dylan Kavanagh are available again.

Cabinteely have 5 points from their 9 league games so far this season with one win, 2 draws and 6 defeats.

Shelbourne have 13 points from their 9 league games with 4 wins, 1 draw and 4 losses.

Cabinteely and Shelbourne met earlier in the season in March and the game finished in a 1-1 draw at Tolka Park.

Shels have the better overall head to head record with 3 wins from the previous 5 league matches with 2 draws.