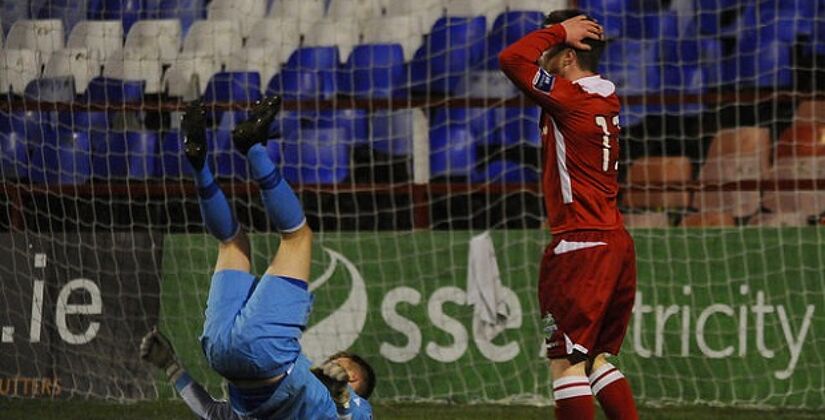 Shelbourne currently find themselves bottom of the First Division for the first time in their history but a win over Drogheda United would certainly be considered a statement of intent from Kevin Doherty’s side as they look to get their promotion push going.

The Reds are still searching for their first league win this year, however, they will take great confidence in dismantling Cabinteely 5-0 in the EA Sports Cup 1st round during the week.

Sodiq Oguntola’s start to life at Tolka Park has been extremely positive. He scored his and Shelbourne’s first league goal last week to secure a point against Cabinteely and then went on to bag two more against his former club when the sides met again two days later.

Speaking after their EA Sports Cup victory, Doherty wasn’t shy of expressing his delight at the number of chances the Reds created in last Monday’s game.

“We created a lot of chances in the Cobh and Cabinteely games but failed to take them, but we took the majority of them tonight. Sodiq Oguntola scored [2], both James English and Mark Sandford came on and scored, Carl Walshe creating a lot of them, so at least I got what I wanted out of the game, - I wanted to have a selection headache for Saturday’s game.”

Experienced centre-half Aidan Collins suffered a shoulder injury in last Friday’s game, however the extent of the damage done is yet to be determined. While Doherty is concerned, he knows there are a number of young players ready to step up and play in his absence.

“He dislocated his shoulder and it went back in again so we need to find out what damage has been done. He’s devastated because he started the season well. Until he returns, he’ll be an important player around the place. We have cover in that position, with young Conor Keeley, playing very well tonight, Ryan Robinson, Bobby O’Reilly and Adam O’Connor can all slot in there.”

Speaking on the upcoming match with Drogheda, Doherty hopes that his side can take confidence from their League Cup win and carry it into Saturday’s crunch clash.

“That will be a tough one! They’re certainly going to be well organised, with some very good players, a couple of them having been with us before – young Aaron Ashe and Sean Brennan are both good players. I’m hoping that we can bring some of the momentum from Monday night’s game into the game with Drogheda”

Collins is the only absentee from the Shelbourne squad this week with no other injuries or suspensions reported.

Drogheda United have had a steady start to this season’s campaign. They opened with a comfortable 2-1 victory over Waterford United before drawing 1-1 with Cobh Ramblers and 2-2 with Athlone Town.

United suffered a shock defeat in their EA Sports Cup fixture earlier this week however, as they went out on penalties to Leinster Senior League champions Bluebell United.

Pete Mahon’s side along with Limerick are the only First Division teams who are still unbeaten thus far this season and he will hope to maintain that record when they visit Tolka Park on Saturday night.

If the Boynesiders were to come away with a win tomorrow night, that would put 7 points between themselves and Shelbourne and despite it still being the early stages of the season, the points won here could play a big part in deciding the promotion spots later this year.

Captain Sean Thornton who scored in the games against Cobh and Athlone suffered an ankle injury in the draw against the latter and is expected to miss four weeks of action.

Striker Sam O’Connor is also ruled out due to a hamstring injury while Liam Donnelly serves the final game of his three game suspension.

Shelbourne haven’t recorded a league win over Drogheda United since 2006 although they did defeat the Boynesiders 1-0 in last season’s EA Sports Cup thanks to a Mark Sandford strike.

There have been a total of 64 league meetings between the sides with Shelbourne edging the head-to-head record with 22 wins to Drogheda’s 18.

This is the first ever meeting between the sides in the League of Ireland First Division.

Love of League of Ireland football began when the once-mighty Sporting Fingal FC came to be in 2008 and started playing their games not too far from where I grew up.