It only took two mintues before the dead lock was broken and it was the home side who did it. St Pats won an early corner which was floated into the box where the unmarked Ryan Guy headed in from six yards out.

St Pats sat back after that and it was clear that Pete Mahon’s side were set-up to play counter-attacking football with Vinny Faherty up front on his own.

Rovers pressed without creating any clear cut chances. It wasn’t until the 39th minute when a long throw-in caused havoc in the St Pats box but the usually clinical Gary Twigg could only tip the ball wide of the goal. 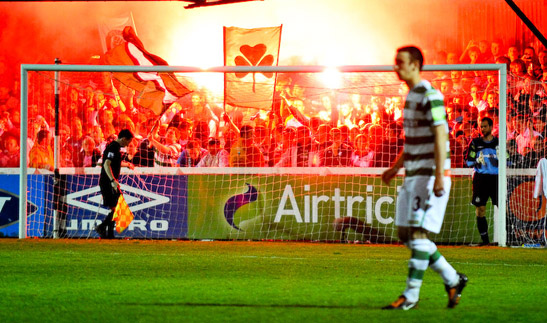 The Scottish born striker made up for the miss just before half time when he toe poked in from close range. A free-kick was whipped in and it missed everyone but it hit the post. Twigg was the quickest to react and he equalised to take the two sides in level at half time.

The game in truth was very scrappy with neither side really created any clear cut chances. Vinny Faherty tested Mannus with a few long range efforts but didn’t trouble the Northern Ireland and Rovers shot stopper.

It was 55th minute when Dave Mulcahy handed Rovers and Thomas Stewart the goal to give the visitors the lead. The St Pats defender seemed to complexly miss the ball and Stewart was on hand to score his 5th goal against the Saints this season.

Billy Dennehy finished the game off with a brilliant strike outside the box that left Gary Rogers with no chance and sent the Rovers fans crazy.

St Pats had no reply and didn’t threaten the Rovers goal at all with the exception of a long range effort from substitute James O’ Brien.

If Shamrock Rovers continue to play like this then they will surely get their hands on the Airtricity League title.