Jason Byrne scored the only goal of the game as Bohemians beat Shamrock Rovers by a goal to nil at Dalymount Park on Tuesday night to re-ignite a league title race that will now, surely, go down to the wire.

There were surprisingly few predictions flying around in the lead up to this game, and with good reason. Shamrock Rovers, pretenders to the crown, have recently hit a few speed bumps in an otherwise flawless few months. Having just convinced us that they can win this league, they have now started to wobble. Bohemians, on the other hand, have spent the season doing a poor imitation of their previous selves and yet they entered this game within reach of their closest and fiercest rivals. No-one had the faintest idea how this one was going to play out.

As it happened it was Rovers who were the first to show. In the third minute they broke down the right and a flighted ball to the opposite flank found Billy Dennehy in space but his cross came to nothing. Two minutes later he delivered another ball into the danger area but Barry Murphy gathered after a brief moment of juggling. 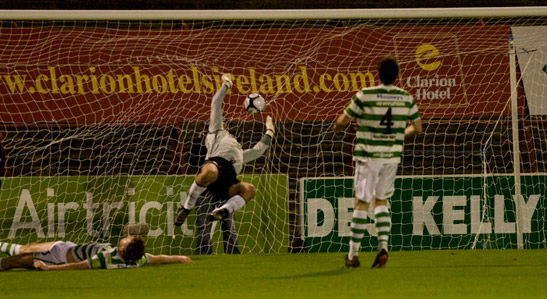 From this point on Bohemians took control of the opening half. With Gareth McGlynn and Killian Brennan wide on the flanks and Raffaele Cretaro flying around the centre like an intelligent pinball the home side offered far more in the way of imagination and intent.

For the most part the Rovers defence dealt well with an almost constant stream of attacks but at right back Pat Flynn showed worrying flashes of the ill-discipline that saw him sent off the last time these sides met.

With Paddy Madden on the bench Pat Fenlon had placed his trust in Cretaro and veteran Jason Byrne to provide his side with the penetration they would need. And on twenty minutes it was Byrne who fired the home side’s first shot in anger. Receiving the ball on the edge of the box he turned and shot towards goal, the ball deflecting off the head of Aidan Price and out for a corner.

When that came in Rovers never fully cleared it and finally Glen Cronin chipped the ball back into the danger area. Ken Oman got to it first, flicking it inside to the waiting Byrne and the rest was simple for the Bohs’ striker who lifted the ball over Mannus and into the roof of the net.

For the remainder of the half there were precious few clear-cut chances but Bohemians looked like the only side who might create one. In the 25th minute Brennan sailed in a cross that Byrne met with an accurate header which didn’t have enough pace to beat Mannus.

A succession of corners and free kicks followed from the Bohs number seven, indicating the weight of Bohemians’ possession and a healthy measure of their dominance. Gareth McGlynn was also starting to cause problems for the visitors, and on the half hour mark Enda Stevens was erroneously booked when Dennehy clipped the winger’s heels as he burst between them.

Ten minutes before the interval Byrne hobbled off and was replaced by Paddy Madden who immediately showed the kind of pace and vitality that Rovers could have done without. But no further breakthrough came and the teams went for their cup of tea with the narrowest of margins separating them.

Still it was plain that something must be done if the Hoops were to get back into the contest and Michael O’Neill obliged, replacing Paddy Kavanagh with Thomas Stewart and switching formation to a more familiar 4-4-2.

And Rover’s second half performance improved dramatically. It was suddenly they who were applying the pressure and the 53rd minute brought a remarkable sequence of missed chances. It was Ken Oman who set the whole thing off with a backpass that Murphy attempted to head clear. However the ball fell to Gary Twigg who took a touch and drove the ball back towards goal. This time it was Brian Shelly who cleared from the line and although the ball now fell to James Chambers, Barry Murphy was on hand to save his effort.

Rovers were now doing in the second half what Bohs had done in the first and with the introduction of Neale Fenn there should have been an added layer of artistry to the Hoops play. But it was at this point that Bohemians managed to wrestle back the initiative.

Paul Keegan and Glen Cronin started to not only win balls in the centre of the park but distribute them with accuracy. Chances were starting to be created for the home side once again, notably for Paddy Madden who, having run at the Rovers defence unchallenged, shot tamely wide on 70 minutes. There was also a mazy run from defender Shelley that brought him all the way to the Rovers box before he was closed down.

At the other end Twigg went down easily when challenged for a high ball in the box and referee, Alan Kelly’s emphatic rejection of the striker’s appeals added to the sense that it wasn’t going to Rovers’ day. Moments later Twigg flicked on a near post header and Dennehy might have done better than direct his header wide.

But it was Bohemians who brought this game home. Aaron Greene came on for the excellent Cretaro and lit up Dalymount Park with a display of composure and skill that marks him out as a talent to be reckoned with.

Indeed, Bohs should have wrapped it up with a minute to play but Madden side-footed well off target after good work on the left by both Powell and Greene. There followed two desperate sorties by the visitors in added time. Baker delivered a free into the box which Murphy claimed and then a corner which was cleared by a combination of Oman’s head and Murphy’s fists.

And so it ended, Bohemians are right back in it, and if Rovers are to claim their first league title in sixteen years then they will now have to do it the hard way.