Shamrock Rovers tightened their grip on the top of the Airtricity Premier Division table as they dismantled Bray Wanderers at Tallaght on Friday night. Two goals from Gary Twigg and another from Stephen Rice followed an own goal from Sean Houston to make Gary Dempsey’s late consolation largely irrelevant.

Managerless Bray Wanderers had veteran Pat Devlin in the dugout for this daunting trip to Tallaght to face league leaders Shamrock Rovers and he will have been pleased with what he saw in the opening fifteen seconds. From the kick-off Bray surged forwards, John Mulroy pushing a superb ball through for Shane O’Neill who was only just turned away from goal by Rover’s captain, Dan Murray. 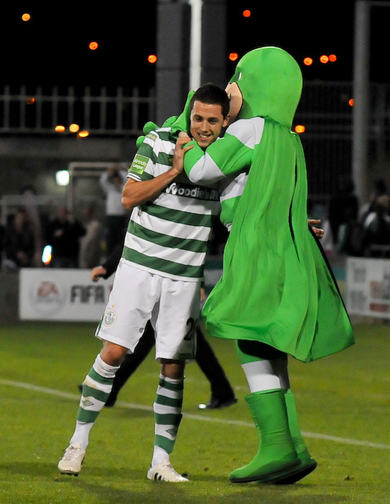 But it was a moment that the Bray legend would have done well to savour as the home side went straight up the other end and created what would be the first of many chances. Somewhat inevitably it was Gary Twigg who flung out a boot to connect with a James Chambers cross from the right that Derek Prendergast only managed to deflect towards the bottom left hand corner of Matt Gregg’s goal. The Bray ‘keeper pushed it around for a corner and the visitors survived.

They were given another reprieve in the twelfth minute when Twigg hooked a shot onto the Bray crossbar but three minutes later Rovers were ahead. Twigg played in Billy Dennehy who’s low cross was inexplicably left by Gregg and left back Sean Houston could only watch as the ball ricocheted off his foot and into his own net.

In the 23rd minute Twigg set up Rover’s second as he nicked the ball off the toe of Shane O’Neill before sliding a pass into the stride of Stephen Rice who powered his shot home from twelve yards.

At this point Twigg took over completely, finishing a delightful through ball from Stephen Bradley and then, on the stroke of half time, running onto a ball from Neale Fenn and calmly lobbing Gregg from just inside the box.

It was his last act of the game, Michael O’Neill deciding that he had done more than enough work for the evening and putting Thomas Stewart on in his place.

The second half, in a curious homage to the first, also started with a Bray chance, Mulroy working hard to provide a ball for Jake Kelly who, slightly off balance, could only scoop it high and wide of Alan Manus’ goal. But there the similarity ended.

The energy and imagination that characterised Rover’s first half play was inevitably more muted in a second forty five minutes that had been stripped of any real meaning. Bray were allowed to push forwards with a little more freedom and while Rovers always looked by far the better team, the visitors did at least threaten the home goal.

Jake Kelly had a promising shot blocked on 72 minutes and four minutes later he picked up on a Danny Murphy error only to screw his effort away from the goal. For Rovers, Thomas Stewart might have added a fifth when he drifted a shot towards the top corner of the Bray goal only for Gregg to arch across and punch powerfully away.

Stephen Rice continued to command the midfield and Billy Dennehy never lost his appetite for taking on his full back but it was impossible to disguise the homes side’s general lack of purpose and, when it came, Bray’s consolation was deserved if only for their perseverance.

It came in the 88th minute when Gary Dempsey took a pop at Manus’s goal and the ball flew into the corner of the Rovers net. But this retaliatory strike will do little to dent Michael O’Neill’s confidence in his team. Nor, in truth will it give much encouragement to Pat Devlin who will know that his side were utterly outplayed. This was a game that clearly demonstrated the true extent of the gap between top and bottom in this league.

extratime.ie Man of the Match:Forty five minutes will do - Gary Twigg.