A superb performance from the Dundalk midfield laid the foundations for this 2-1 victory as goals from Neal Fenn and JJ Melligan opened up a decisive lead, a poacher’s effort from Gary Twigg proved to be no more than consolation.

How the first half ended goalless only the man with the big beard up in the heavens knows. Shamrock Rovers had the first chance, Thomas Stewart missed on seven minutes as a right wing cross from ex Drogheda favourite James Chambers saw his side foot effort glide wide of Cherries right post. After ten minutes the game settled and the Lilywhites midfield ably abetted by hard work from Neale Fenn and Faz Kudozovic started to get a grip. To such an extent that Shamrock Rovers struggled to get any play together at all. Stephen Maher had the half of his life as he harried the living daylights out of anything within his scope. The Dundalk midfield dominance was demonstrated when Michael O’Neill withdrew Robert Bayly on 39 minutes to send Stephen Rice into the fray. 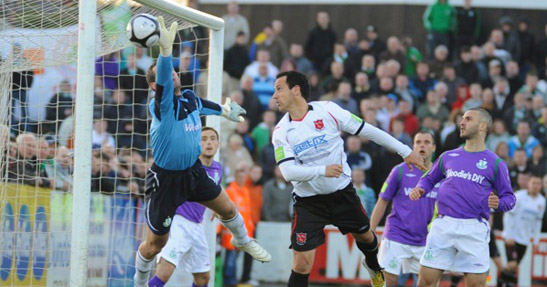 For all the home team’s dominance in terms of possession they never opened up the visitors entirely and their best chance fell to Fenn on 18 minutes when a Ross Gaynor corner to the far post was headed back across goal to Fenn about four yards out who could only direct his header straight at Alan Mannus.

The second half started in much the same vein with Dundalk on top and on 52 minutes they opened the scoring. A Ross Gaynor in swinging corner was played to the far post where an unattended Fenn headed back across the goal and it crept past desperate efforts on the line to keep it out.

The night got even better for the home team when a Gaynor break down the left saw his cross into the middle fall to Kudozovic, he lost the ball but it fell to Melligan who showed great tenacity to battle through a couple of challenges in the box and slot past Alan Mannus right hand to the corner of the net.

It was all Dundalk at this point and they looked likely to go on and see the game out. However the visitors struck back through a close range Twigg goal. Stephen Rice threw the ball into the near post where Aiden Price got up highest and the ball fell to the Twigg three yards out with the expected result. Shamrock Rovers really came into the game on the back of this and may well have got an equaliser had off the pitch concerns not disrupted their flow.

Chambers picked a second booking for a slightly late challenge on Maher, as he made his way to the tunnel Michael O’Neill gave him a consoling pat on the head and was then also sent to the stand. This incensed some of the travelling support and they started to take their frustration out on the Dundalk stewards. Garda dogs restored order but the game was held up for over five minutes whilst the trouble was quelled.

Despite throwing everything forward Rovers were unable to find an equaliser and the home team left the pitch with a well deserved victory to a standing ovation. Michael O’Neill will be hoping that his boys can regroup on Friday against Galway in Tallaght. Whilst Ian Foster’s boys face league action next away at St Pats.