A late James Chambers penalty saved Shamrock Rovers as they came from behind to snatch a point against Sporting Fingal on a windy Easter Monday in the Morton Stadium.

For most of the match, the weather dominated with Rovers playing into the wind in the first half but most of their attempts fell victim to the gales sweeping the pitch.

The Ravens had most of the early possession, with Eamon Zayed having a half chance after 12 minutes. Conan Byrne also had an early chance from a free kick for Fingal, but the midfielder shot just wide. Rovers had to wait until 17 minutes in to even get a glimpse of the Fingal goal, and even then Thomas Stewart was judged to be offside following a clever ball in.

The first clear chance of the match came six minutes shy of the half hour mark. Ger O’Brien put a lovely cross into the Shamrock Rovers area and Ronan Finn somehow shot over from yards out to let the Hoops off the hook. 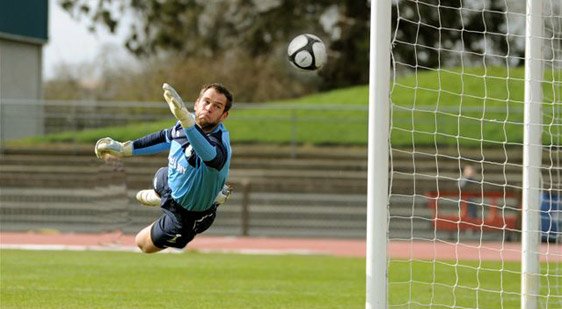 Three minutes later, a Dan Murray slip-up almost afforded Fingal a soft goal but goalkeeper Alan Mannus was on hand to clear the ball to safety.

Rovers eventually began to exert more influence on the match, mainly through the attempts of James Chambers. The former Shelbourne and Drogheda United midfielder worked tirelessly to win the ball and provide chances for his teammates. One such chance came on 33 minutes with Sean O’Connor darting down the wing and turning inside Ger O’Brien, only to see his shot blocked and cleared.

After Rovers attacks, Fingal ‘keeper Brendan Clarke aimed his kick- outs squarely at Gary O’Neill, attempting to release the striker quickly. A combination of high wind and resolute defending ensured that the striker was kept at bay.

After the half-time break, both sides seemed to have a fresh attacking outlook. Fingal took the initiative early on despite playing into the wind. In the first minute of half time, a Shaun Williams corner almost found Eamon Zayed, who looked like he had a clear shot on goal. The wind again proved to be the best defender as the ball fell awkwardly short and was cleared successfully.

Ronan Finn showed why he is the reigning First Division player of the year in the second half, the midfielder expertly crafting a string of Fingal attacks. Finn played clever short passes, spun on the ball and ghosted past defenders but still couldn’t find the back of the net.

The deadlock was broken after 77 minutes of play. Conan Byrne was somewhat lucky that the wind caused a cross to fall at his feet, and the midfielder ran past two defenders and smashed the ball past Alan Mannus to make it 1-0 to Fingal.

Six minutes later, the introduction of Graham Barrett saw Rovers go to a more attacking 4-3-3 formation in an attempt to push for an equaliser. The equaliser did come on 86 minutes through a James Chambers penalty. Chambers had earlier taken a free kick which hit off the wall but in the process hit the outstretched hand of Gary O’Neill. Chambers dispatched the penalty in off the left post to give the Hoops a share of the points.

Despite late efforts from both sides, the match ended a draw. Although Fingal and Rovers had their spells of dominance, a score draw will probably be judged to be the fairest result.