Click on the image to view a selection of photos from the game, courtesy of George Kelly.

Shamrock Rovers withstood a determined challenge from Galway United to claim their first victory of the season at Terryland Park, claiming the spoils thanks to an early Pat Sullivan header.

Bar an impressive opening quarter, the victors were rarely dominant and were slightly fortunate to come away with the full complement given the dearth of chances they created and the one-on-one that went abegging for Sean Connor's side. No matter, the visiting troop will sing loud and long into the night as their side have gotten back to winning ways.

For a side without a win before tonight, an early goal will have been high on Michael O'Neill's agenda. To have been given a helping hand in achieving this was an added bonus. 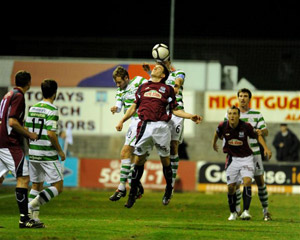 Sean O'Connor had already caused havoc with a viciously whipped cross from the left, from which Barry Ryan did well to deflect Billy Dennehy's volley wide, when another opportunity was presented in the seventh minute. Cue another fabulous delivery and Pat Sullivan rose unattended to steer The Hoops in front.

The visitors continued to look impressive for a time but Galway, with Stephen O'Donnell their driving force, came more and more into the contest and with the Rovers' threat dwindling, hopes of a first home league win over the Dubliners since June 2006 began to rise somewhat for the natives.

They should have at least been on level terms shortly after the half hour mark when Cian McBrien latched on to a punted clearance from Ciaran Foley, lucky to still be on the field after a reckless challenge, and found himself with only Alan Mannus to beat.

The young midfielder has often shown a healthy appetite for shooting from distance but on this occasion, when faced with the whites of the goalkeepers' eyes, McBrien fluffed his lines spectacularly.

A cagey conclusion to the half only brought two further efforts of note when McBrien swivelled on 40 minutes but shot straight at Mannus, while Robert Bayly almost caught out Ryan with a shot from distance but the shot-stopper recovered to tip behind for a corner.

Two defensive substitutions encapsulated the opening ten minutes of the second half as Thomas Heary departed the Galway rearguard, while the goalscorer Sullivan was stretchered off after straining to clear and picking up what looked like a hamstring tear.

McBrien then tested Mannus with a rasping volley before Sean O'Connor struck a trademark free kick that would have beaten many a lesser 'keeper than Ryan.

With chances at a premium, and the visitors keenly aware of the need to cling on to the three points, tensions began to run high, no more so than when O'Donnell was scythed down on halfway, left for dust on the turf, and winger O'Connor played on regardless.

Yellow cards were brandished, the crowd bayed for O'Connor's blood, but they were left ultimately deflated as Shamrock Rovers held on without further chances conceded. Substitute Don Cowan almost wrapped things up with seven minutes remaining, but his initial burst couldn't get him clear of Paul Sinnott, who recovered well to halt the striker as he bore down on goal.