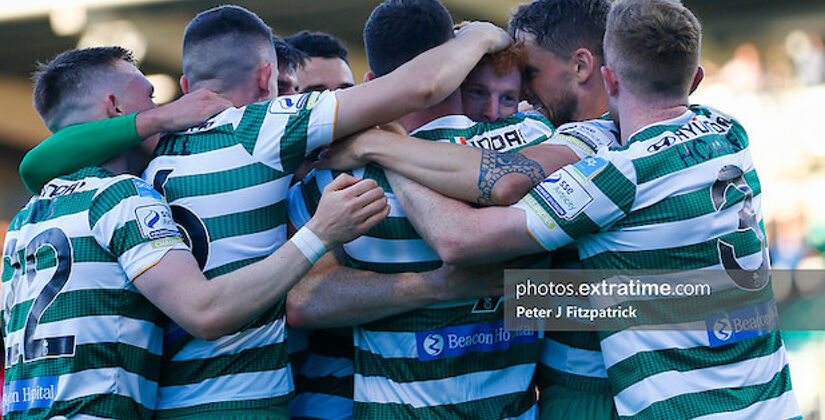 The Hoops host the North Macedonian champions FC Shkupi on Thursday night at Tallaght Stadium (kick-off 8pm) in the third round of the UEFA Europa League qualifiers.

The winner of this tie facing the loser of the Qarabag and Ferencvaros Champions League qualifier. O Wednesday night Qarabag drew 1-1 at home in Azerbaijan with Hungarian champions Ferencvaros in the third qualification round.

Shamrock Rovers were close to a famous Champions League qualifier victory over two legs against Bulgarian side Ludogorets but they eventually lost 4-2 on aggregate despite a 2-1 win in the second leg. The result drops them into the Europa League qualifiers.

Stephen Bradley’s side will take confidence from that second leg showing and they have the relative safety net of knowing a win in this tie will guarantee them Europa Conference League group stage football while a loss will see them enter the competition at the playoff stage – where they will face winner of the Ballkani (Kosovo) and Klaksvik (Faroe Island) Europa Conference Leauge third round qualifier.

On another day Rovers could be coming up against Croatian giants Dinamo Zagreb but they were extremely lucky to scrape past Shkupi in the second qualifying round of the Champions League meaning the Macedonians dropped down to the Europa League and while this is seen as a favourable draw, Bradley is taking nothing for granted.

“They are a really interesting team. Against Dinamo away they should have won the game. And against Dinamo at home, they deserved to lose by more than one goal. They can be a very dangerous team. The front four are really dangerous players, we will see that tomorrow night. So, we will need to be at our very best to go and win the tie.

“They are very strong in the attacking part of the pitch. So we have to make sure that we're focused and that we concentrate for 90 plus minutes tomorrow because we're going to need to to get through the tie.”

With a close to sell-out crowd expected in South Dublin, Bradley hopes his side can continue their strong home record and give themselves a platform in the tie. The Hoops have six  wins and a draw from their last nine European homegames.

“Yes, we can learn from the [Ludogorets] tie as a whole, both the first and second legs. There were parts of the first leg that just weren’t good enough. We have to learn that. But in the second leg, I thought that we were very good, and we obviously won the game. We were gutted that we couldn't add one or two more goals to take us through.  Overall, to do that to a team of that quality I thought that the players were excellent.

“Hopefully, we can get another sell-out, the crowds have been fantastic. They are a big reason why our home record in Europe in recent seasons is so good. When it’s like that it is intimidating and hostile for other teams to come and play, and our players feed off that energy, so hopefully another sell-out tomorrow night. “

A lot will rest on the fitness of Jack Byrne who missed both legs against Ludogorets with a hip flexor injury and Bradley has rated him 50/50 to play.

The North Macedonia champions came into existence just a decade ago after an amalgamation of Sloga Jugomagnat and FC Albarsa.

Shkupi finished league runners up in 2020/21 and last season they topped the 33 game campaign by a dozen points losing just three matches (all away from home).

Shkupi have qualified for Europe in each of the last five seasons but this year was only the second time they won a tie.

In 2018, Rangers beat Shkupi 2-0 on aggregate in the first round of the Europa League qualifiers.

They went out again in the first round in the following two seasons - to Pyunika from Armenia (5-4 on agg) and Azerbaijani side Neftci (losing 2-1 away in the one legged Covid-19 amended tie).

Last year in the Europa Conference League qualifiers they won their first European tie – defeating Llapi from Kosovo 3-1 on aggregate (winning 2-0 at home and drawing 1-1 away_ before their elimination in the next round 5-0 to Santa Clara from Portugal.

North Macedonia are an improving nation having participated in EURO 20202 –their first major tournament – and knocking Italy out of the 2022 World Cup playoffs.

Their top scorer last season was Sunday Adetunji who notched 20 goals in the Macedonian League.

The Hoops are undefeated in all competitions in Tallaght Stadium since August last year.

Their last defeat came in Europe – a 1-0 loss to Flora Tallin in the second leg of their Europa Conference League play-off 12 months ago.

They are undefeated in the last 22 matches they have played in Tallaght Stadium.