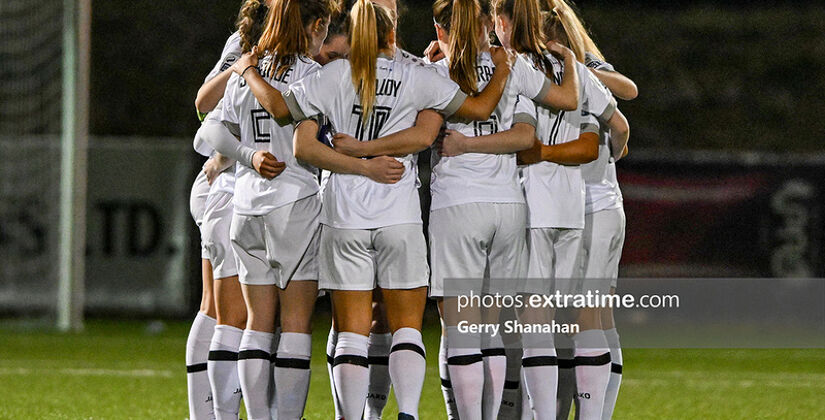 The Youths took control of the game with immediate intent, Ciara Rossiter’s early attempt at squaring the ball into the box was well defended by DLR alongside the corresponding corner kick.

The Waves responded with two attempts in quick succession at long range, both from ex Wexford Youths star Sarah McKevitt, however both were easily saved by the home keeper Maeve Williams, who is in a fantastic run of form as of late.

The home side had two good chances around the fifteen-minute mark when Ellen Molloy skimmed a direct free kick over the post and Meadbh Russell placed it into the safe hands of DLR’s Eve Badana after a decent effort from a tight left angle.

Shortly after, DLR’s Sarah McKevitt whipped in a fantastic ball which was headed in from close range by her team mate Katie Malone to make it 1-0 to the away side, an important lead in a tight game.

The remainder of the first half appeared even with both teams having their chances, most of which came from set pieces. DLR’s Kate Mooney came close with a long range shot after the ball was given away by Wexford’s Nicola Sinnott, however the chance flew inches over the post to deny the visitors a more comfortable lead.

The set pieces paid off for the Youths five minutes before half time when Nicola Sinnott headed the ball into the Waves net after a corner kick from Aoibheann Clancy, lifting the pressure off the home side. DLR were hoping to join fellow Dublin sides Shelbourne and Bohemians - who had both won earlier in the day-  in the semi-finals however they had to settle with one goal apiece at the break.

It was a poor start to the second half for the visitors when central midfielder Mia Dodd was given a straight red card after a clash with defender Nicola Sinnott just outside the Youths box. This allowed Wexford plenty of space and opportunity, DLR captain Jess Gleeson providing an outstanding performance in the defence throughout as the home side pressed.

DLR’s most vital player, goalkeeper Eve Badana, soon became the second player to see red after running outside the box and tackling Wexford’s Ellen Molloy with 25 minutes to play. The latter’s magical flick with her back to the goal sent the Youths 2-1 up with five minutes to go, after a series of chances throughout the final third.

Ciara Rossiter soon slotted it home for a 3-1 win after a fantastic ball from Becky Watkins allowing an easy tap-in past the substitute keeper, Rugile Auskalnyte, who did well in goal from the bench. The Youths kept their cool for the remaining few minutes and easily booked their place in the last four of the evoke.ie FAI Women’s Cup.