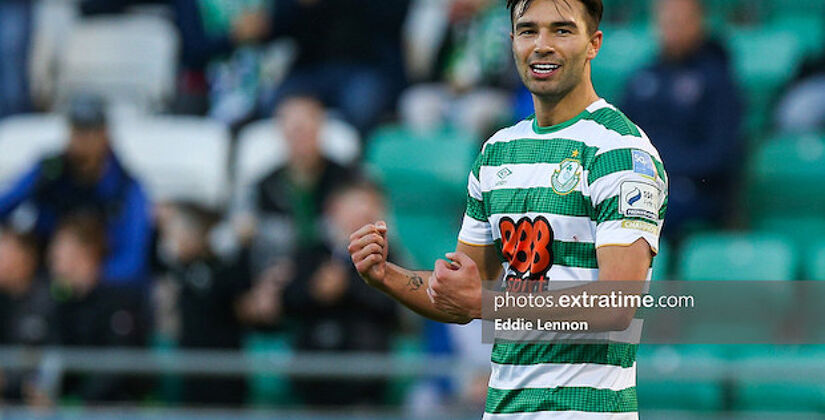 A dominant display from Shamrock Rovers saw them open up a seven-point gap at the top of the Premier Division after they thumped UCD 3-0 at the Bowl on Thursday evening.

First half goals from Barry Cotter (who was one of three changes for the visitors), Danny Mandroiu and Rory Gaffney took the game away from the Students in a clinical opening half.

With nearest challengers Derry City not in action until Friday, the defending champions laid down a marker and sent a message to the rest of the league that they are hitting top gear after extending their unbeaten run to 13 games including four wins on the bounce.

Jack Byrne added another stunner to his never-ending catalogue of fabulous assists with a delicious diagonal ball to Cotter who made no mistake with a close-range header in the fifth minute.

Mandroiu fresh off a late winner against Derry City last Friday came up with the second goal after 17 minutes. He started and finished the move after some neat interplay on the edge of the box before hammering the ball home to put the game to bed.

UCD were rocked by the devastating news that marksman Colm Whelan was set to miss the remainder of the season after picking up an anterior cruciate ligament injury in last week’s win over Finn Harps and they were bereft of any attacking ideas for most of the game.

They did conjure up one good opening and Liam Kerrigan might have halved the arears when he was sent through on goal before he fired high and wide and not particularly handsome.

On what was almost the perfect evening for Stephen Bradley’s charges, it will be tinged with some worry after Jack Byrne was forced off with an injury in the 38th minute after going down off the ball.

Those worries were soon eased somewhat when substitute Aaron Greene hunted the ball high up the pitch and played a low cross for Gaffney to tap home and atone for an earlier miss moments earlier.

The Hoops were roared off at half time by the large traveling support and Gary O’Neill, Neil Farrugia and Aidomo Emakhu were introduced for the second half.

There wasn’t much action of note after the interval with the result already secured. Rovers evidently took their foot off the gas with a view to Monday’s match in Drogheda maybe.

Before the hour mark Bradley introduced 18-year-old Kieran Cruise off the bench.

Despite an improved second half showing as the scoreboard suggested, UCD still struggled to make any inroads in the attacking third with the Belfield locals growing frustrated with the Students.

A long-range free kick from Mandroiu was the closest either side got to a goal in the second period as the crowd began to filter out with ten minutes remaining.