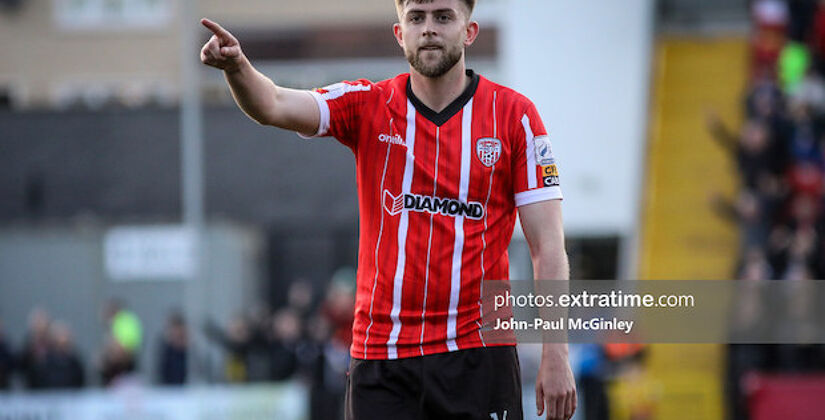 Derry City claimed all three points when they secured a narrow 1-0 win over UCD before a small crowd at the Belfield Bowl on Friday night.

The victory brought to an end their seven game winless run through May and June and it has also enabled them keep in touch with league leaders Shamrock Rovers who also had a 1-0 win over Bohemians.

Getting the three points on the night was all that mattered to the Candystripes camp, however the bigger picture is that they lacked real penetration for all of the first half and did not look like the title contenders that they did in the early part of the season.

The first 45 minutes of the game offered very little by way of entertainment to those in attendance and that added to the very subdued atmosphere in the ground.

The visitors’ best chance of the opening period came from a well drilled 31st minute corner by Will Patching which was met by the head of Ciaran Coll but his header flashed wide of the post.

They also saw a curling effort by Jamie McGonigle tipped over the bar by Kian four minutes from the break, while UCD themselves had a half chance when Sean Brennan shot wildly over the bar in the 33rd minute.

The second half was a lot livelier, helped no doubt by the only goal of the game in the 53rd minute.

It came from the penalty spot after Matty Smyth was upended in the box by one of the UCD defenders and referee Ray Matthews had no hesitation in pointing to the spot.

Patching, who had a fine game throughout, dispatched the penalty with ease, sending Moore the wrong way for his ninth goal of the league campaign.

UCD made a raft of substitutions after conceding the goal but apart from a few counter attacks they were unable to influence the game sufficiently to deny the visitors the three points.

The Candystripes had UCD pinned back in their own half for the last 20 minutes but as was the case during their 7- game winless run, they lacked precision in front of goal and snatched at the chances they created during those final stages of the game.

The Students had run out of ideas at this stage but did well to limit the damage to that single penalty goal which separated the sides at the end of the 94 minutes of play.

Both teams have tough away fixtures next Friday night, Ruaidhri Higgins’s side will try to build on tonight’s win when they face Bohemians in Dalymount Park while UCD travel up the M1 to face second placed Dundalk at Oriel Park.