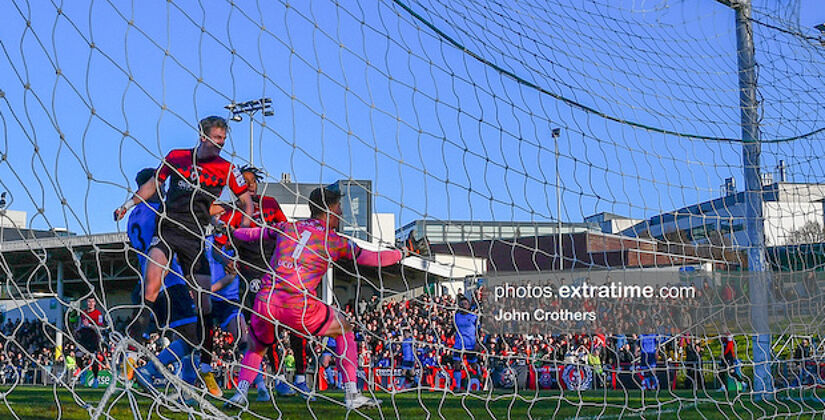 A Sam Todd equaliser earned UCD a deserved point as they played out an entertaining 1-1 draw with Bohemians at a sunny UCD Bowl.

Todd rose highest midway through the second half to open the Students’ goalscoring account at home for the season after Promise Omochere had given Keith Long’s charges an early first half lead.

Andy Myler’s side remain unbeaten in Belfield while Bohs’ wait for an away win goes on and their winless run extends to four league games.

Despite an entertaining first half, the opening goal arrived in calamitous circumstances. UCD stopper Lorcan Healy was hesitant over what seemed a routine cross allowing Omochere to steal a march and turn the ball home from close range.

That opened the gates for a pulsating first-half with Omochere, Stephen Mallon and Dawson Devoy causing the home side countless problems.

Devoy struck the post from long range while Mallon forced a decent save out of Healy who atoned for his earlier error.

The UCD frontman Colm Whelan should have pulled the Students level but despite having three attempts at James Talbot’s goal he was unable to find the net.

A quick counter-attack saw Whelan played in behind and after he was denied by a combination of Talbot and debutant Sam Packham, he skied his third effort over the bar.

Winger Liam Kerrigan was a constant thorn in Bohs’ side and he was unlucky not to level affairs after a mazy run left Max Murphy and Ciaran Kelly for dead before Talbot narrowed the angle.

The visitors were lively in the first half but a much more turgid side emerged from the half time dressing room as UCD put Bohemians to the sword early on.

Dylan Duffy stung the palms of Talbot in what was the best of a series of long-range attempts from the hosts.

Whelan was denied his first goal of the season for the fourth time after he pounced on Kelly’s error but was denied by Talbot in what was becoming a personal battle between the pair.

Bohs were unlucky not to retake the lead but Todd was the hero on the line for the college as he turned Mallon’s goal bound header over the bar.

Moments later he met Kerrigan’s corner unmarked to fire a low header past Talbot to bring the Students level.

The closing stages were end to end as both sides pushed for a winner. Omochere will feel he should have won it for the Dalymount side but he could only head Jordan Flores’ free-kick over the bar from point-blank range.

It wasn’t to be Whelan’s evening either and he was denied a fantastic individual goal after his amazing run produced a stunning save from Talbot to turn his curling effort around the post.

Boos rang out from the large Bohs faithful at the final whistle with the frustration of dropping six points from winning positions clear.