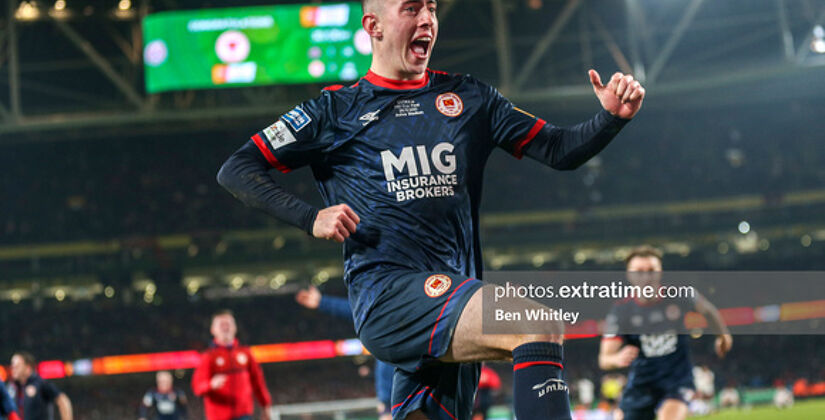 It finished all square in the battle of the former colleagues as Kevin Doherty’s Drogheda United and Tim Clancy’s St Patrick’s Athletic played out a 1-1 draw in Richmond Park on Friday evening.

A Dayle Rooney strike in the first-half was canceled out by Darragh Burns leveling it on the 76th minute.

It will feel like a point gained for the Louth side and possibly two dropped for Pats if they are to be involved in this year's title race.

The home side started the strongest and dominated possession for the first five minutes. Drogheda seemingly happy to sit deep and soak it up. Chris Forrester orchestrated the first opening, his pass split the defense for Darragh Burns, who crossed for Mark Doyle but the winger was offside.

The Drogs only foray out of their own half in the opening few minutes came after Dayle Rooney pressed Joseph Anang in the Pats goal well and forced the West Ham loanee to kick the ball straight out. The Saints then resumed their control and Anto Breslin blazed a free-kick over from a good position.

On the 18th minute somewhat against the run of play Drogheda hit the front. Pats failed to clear a low cross and Rooney nipped in ahead of the center-backs before rounding the keeper and smashed the ball into the roof of the net from close range.

Pats continued to push for an equalizer and Eoin Doyle went close on two occasions. The two Doyles continued to link well and Mark almost had Pats level on 33 minutes. The ever dangerous Burns crossed to the back post before Doyle narrowly shot over against his former club.

Drogheda nearly doubled their advantage right after the second half began, Evan Weir got in behind James Abankwah who had just come on but his shot was saved by the on-rushing Anang.

Tom Grivosti nearly made it two goals in two games just before the hour mark but the center backs header was saved by Sam Long. Burns and Ben McCormack then took turns with long range efforts. Both picked up space in front of the Drogs back three before turning and shooting wide in the space of a few minutes.

Pats were piling on the pressure but the Louth men were defending resolutely.

Mark Doyle headed over after an in-swinging cross on the 74th minute, the wide man should probably have done better.

The pressure eventually told and on the 76th minute the Saints were level. Darragh Burns made a great run to the front post and connected with Anto Breslin’s cross.

The Inchicore side rang the changes and Tunde Owalabi in particular looked lively in patches when he came on.

Kevin Doherty’s side reverted to a back five at times but mostly kept Pats to long shots and half chances in the final ten minutes. They may look back on this as a valuable point at the end of the year.